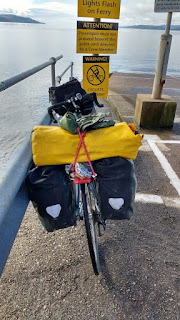 Stayed put. As per the weatherman it was windy all morning and rained all day. Tomorrow at least not the winds. Also tried to use the time to lay up energy, restore my muscles.

Woke early, still raining, but at least no wind. Left probably around 8 a.m. I haven't been following the cycle route completely because sometimes it turns into a slog, or logging track. So stayed on A83 before turning off to go down to the ferry, about 25 miles. By this time the weather was sunny. Lochranza was a blur as I really wanted to catch the 13:55 ferry, only giving me 1.5 hours to cover 15 miles, plus a big uphill. After descending and following the coast I met another cyclist named Murray, he paced me to the ferry. I got there just in time, the last person on. So far on this tour I haven't seen much wildlife. Also rarely do I meet cyclists going in my direction. There are quite a few passing me going the opposite direction.
Ardrossan, I followed signs for cycle route 73, then for 7. Definitely this side of Scotland is less pastoral. In fact so far very industrial. It is working class, golf courses, trainspotting. In Preswick I passed the airport for example. There are power plants and highways. I passed over my first M road.
I eventually got to Ayr and tried to follow directions to a camping/caravan place. Way off base. But as it was getting dark, I scoped out a stealth camp site by the River Ayr. I am totally afraid of being found so will turn off device.
About 67 miles as cyclometer acted up after Broderick to Androssan ferry.


Posted by Jane Hertenstein at 4:00 AM