Books for a Pandemic

I’ve been thinking a lot lately about Millennials—I know, I know they get a bad rap because they don’t know anything and only pay attention to their phones. Or so it goes. Actually they have lived through the encapsulation of The Great Depression, World War II, and Vietnam.

Thus said: a lot of stupid mistakes in American history. All of it foisted upon them.

During the time of Coronavirus I think Office Girl by Joe Meno captures this moment in time. The novel has this indie feel to it of young adults circumnavigating the world. They have dreams, but they don’t seem to fit into current reality. In a wasteland of gentrification and the world falling head-first into shit, this couple has a moment. Check it out—I mean, download it.

The Paris Review has an article
https://tinyurl.com/y6v5yhej
about parents discovering children’s books because they are staying at home reading to their kids. Some of these are older books such as Little Bear by Elsa Holmelund Minarik and What Spot?, now out of print.

We are now reading through the lens of pandemic, through the fog of timeless isolation, from a yearning to go back to “normal.”

From the article:
What Spot?, published in 1963, features a lonely walrus adrift on an icy island. He watches the sea and the ships that drift by, happy and content, day after day, until, one day, he sees a black spot in the snow. Needing reassurance that he is not the sole witness to something that may or may not exist, he implores a puffin, whom he befriends, to see it, too.

We all feel like the lone voice crying out. I have become unmoored in the universe. All my familiar markers have been erased and I am trying to create news ones—which, too, are being erased each week. What we have is a beginning with no end.

The only measurement is the end of the world/death. So that’s what we avoid.

In reading certain books these days we can easily identify with the protagonist working to avoid disaster/tension/pending catastrophe. Even if it is all internal—mostly in kid’s lit the physical world can be dangerous (rather than existential).

In The Night Diary by Veera Hiranandani we follow along as a family is forced to leave their home in India to journey to—India. I know confusing. Also confusing to a young girl, Nisha when her country is left partitioned by political leaders when Britain pulls out after 200 years of rule. The place goes mad. Suddenly everything she’s ever known is upended. Her new country is called Pakistan—and even more confusing is it can’t be her home because her father and his side of the family are Hindu. They are forced to leave.

The journey almost kills them.

We learn about the sectarian fights along the way and how populations turn on each other in distrust. Reckless political talk puts everyone in danger. I was struck while reading that 1947 sounds a lot like today. None of know how it will all turn out. The Night Diary was a Newbery Honor book for 2019. One well worth reading during this time of quarantine and imposed isolation. 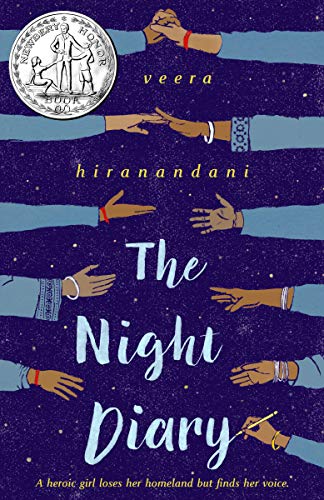