O Holy Night is a well-known Christmas carol composed by Adolphe Adam in 1847 to the French poem "Minuit, chrétiens" (Midnight, Christians). I remember it as the finale to the Christmas Eve program at the Presbyterian church we attended in Kettering.

It can be a long night until the next morning to hold off on opening presents. At least the car ride and time at church filled those tense, anxious hours.

O Holy Night seems to be the perfect vehicle for a soloist, and, indeed, the woman who sang it annually was a trained professional, the daughter of one of the congregants, who came down from New York City. I remember one snowy Christmas in particular when there was speculation whether she would make it in time. Yet, always, in the end she rose up from the robed choir to take her place at the podium. The lights in the church were dimmed, lit mainly by the Advent candles, all of them now burning. The coughing and fidgeting ceased—in expectation. Or perhaps, we were all tired from busy days of wrapping and baking, and last-minutes shopping. Preparations for the “big” day receding as she began.

It is a song meant for a hushed sanctuary. It starts slow and low, painting a picture of the weary world, waiting. Yonder, over the horizon will come a glorious morn. Of, course this is the morrow, the day of presents. But, maybe more. There seems to be something even grander out there as the words come crashing down. Fall on your knees, the song and soloist demand.

The room fills with her voice and shakes—or is it the flicker of the candles, sleepy eyes blinking away fatigue. Hear the angel voices, o night divine. My heart wakes up as her voice rises.

Here is something to think about: the slave is our brother. Nowhere else do we hear this. In the 70s there were calls for social justice and ecology in the form of Earth Day, but here is an absolute truth: all those people who look different from us, who eat different foods, and worship other Gods, they are a part of us; we are one family. And, on a night such as this, I firmly believe it.

Christ is the Lord! It builds to a crescendo and by now I am fully alive to the message. Presents and the temporal have fallen into the background as she sings a series of pitched ohhhhhhs. Ending on a finale note. Divine.

We sit stunned. We do not know whether to clap, move toward the vestry, reach for coats. Hard to believe it is over for another whole year. I long for those angel voices, for that pure feeling that the slave is my brother, for that moment when even the candles burn brighter, higher, and the universe aligns.

The afterwards is an afterglow. Driving through neighborhoods decorated, lit up. Bleary blinking colored lights lulling me asleep.

And, I wonder, could anything ever be better than this. This now. 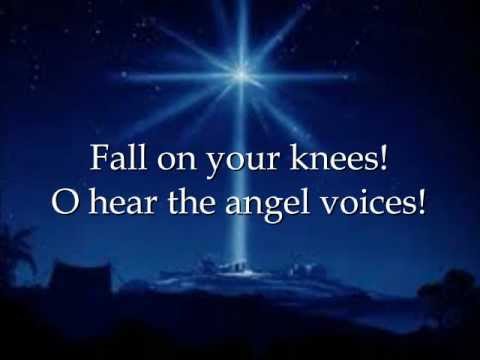