What's Wrong With You?

Over the weekend I got hit on my bike--

It was by another cyclist at a 4-way stop. I stopped and he came around me to pass into the intersection as I made a turn left. Definitely it was an accident. As I picked myself up off the pavement (he was able to stay up as he was skirting by; I hit his back wheel and fell) he immediately said: You didn't signal.

True, I thought, but you didn't shout out "passing." Then also thinking these things take a while to sort out, I guided my bike over to the curb and out of the intersection. Once off to the side I asked him his name. "Why do you need to know?"

Hmm, okay, I thought, this guy's a jerk. He was a middle-aged white guy and I immediately picked up a whiff of privilege. I also surmised he wanted to control the narrative--even though the only thing I'd said so far was to ask his name.

"Are you okay?" I knew he wanted me to be okay so he could keep going and get on with his day. But as someone who has been riding for over 50 years (I know, I'm pathetically old) I knew that I needed to access myself and the bike before letting him go.

I answered him by saying, "You didn't want to give me your name." I thought maybe adrenaline was making him present as a jerk and he'd snap out of it. No.

"Jeremy. What's yours?" His tone was demanding. I stood there staring at him. Really?

I got on my bike and rode away, disgusted. There was no way I wanted to continue looking at this bully. Later at home I bandaged my scrapped elbow. I'm okay, but angry.

Angry at myself for giving up and not letting him know then and there that I was a person. Angry at him for his smug privilege. Are people so afraid to be real and show authentic concern without automatically assuming I'm going to sue? 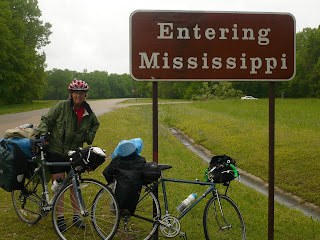