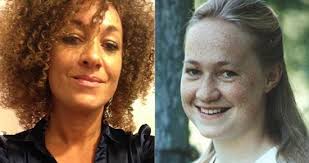 I can’t stop reading about this issue—about reverse passing, or passing, or identity and self-identity or . . . it’s hard to put my finger on what makes this case so intriguing.

It boils down to: Who am I? Am I the sum of my parents, a product of my community, or the evolutionary offspring of my DNA? Is it in the genes or in the brain—who we are?

These questions often come up when looking at false memoirs—something this blog talks about a lot. I’ve always been fascinated by people who whip up whole stories, whole novels, whole worlds about their past. Some might disagree and say they are just stretching the truth, but in every stretching the act of lying not only affects the person telling the lie but the ones deceived or pulled into the untruth. Telling the truth about ourselves is important on so many different levels.

Nevertheless, it is a complex question of one’s identity. One not so easy to parse.

There have been times when I’ve identified more with a specific group than with my actual family. Just because we share the same gene pool, the same parents and grandparents doesn’t mean that much if we can’t find common ground. What is the cord that binds us together? Throughout life we are drawn and then fall away from friends depending on our current worldview. Education and experience, life milestones such as getting married, having kids, getting a divorce, or simply enrolling your kid in soccer moves us into and out of circles we might not have anticipated. Identity is somewhat fluid depending upon where we are physically and in the journey of life.

This past weekend I finished reading Chris Tomlinson’s book about race, Texas history, and part family memoir, and—it’s complicated. TomlinsonHill: The Remarkable Story of Two Families Who Share the TomlinsonName - One White, One Black. See what I mean.

No one wants to talk about their slave holder past—see Ben Affleck. But it’s there, lurking in the dark sin corners. At some point we all were oppressors. Tomlinson as an AP journalist covered some of the most horrific clashes involving race while a reporter first in South Africa during the dismantling of apartheid and later in Rwanda during the genocide. I copied out a paragraph that I think relates to Rachel Dolezal:

In Africa, I witnesses bigotry based on anything from the color of someone’s skin to completely imaginary ethnic differences. Once I scraped away the false veneer of so called atavistic hatred, I found cynical politicians promoting baseless bigotry to gain or boost their their power and privilege. While they used skin tone and nose shape to define people, as in Rwanda, DNA research shows there is no such things as race.

Crazy, right? I can’t tell you how many times at Twitter and on Facebook I’ve read stuff that Rachel didn’t even look black enough or comments about her nose.

Growing up in Centerville, Ohio where I swear to you the only black kids I met were the ones adopted by white families, there simply was not a lot of mixing. I’m sure it was intentional. Except there was a girl down the street. She was the older sister of a girl about my age. Half sister as the dad had remarried and had a second family. Anyway this girl, not sure of her name, became involved with an African American. My mother said she took up with a black boy. There is a reason I don’t know much more about her or the end of the story because this girl stopped existing. She disappeared from the neighborhood and I never once heard her family mention her again. But I always wondered about her. If she was banished. I’m sure her exile took on romantic qualities in my head, but now, more than 50 years later, I wonder: Who became her people? Who saw her through the hard times? What was her name?

Posted by Jane Hertenstein at 10:00 AM