Last night after Nick got home we were talking. I said how beautiful I thought the town was. Really a gem tucked into the hills of Devon. He said, This was supposed to have been Exeter. I'll have to figure out later what he meant. He also said the hills in Devon go up, then up, then up. He's from London, rather flat like Chicago and he was amazed. So today I tried to mentally prepare myself. I set the bar low, and I exceeded the number of miles by 20 of what I thought I might do. But it wasn't easy, and yet it was also very pleasant.
For one thing, I started out on back roads, deep into hedgerows, the road subsides into the earth, you feel sometimes like you're in a cave of foliage. Even the trees grow over the road and tree trimmers carve out space for vehicles to pass through. Thus, the way today was shady. Plus, the sky was a bright blue. (The past few days have been solidly overcast.) So temps were not bad and when I pushed or rode uphill I wasn't swimming in sweat. And, I was able to ride up MOST of the hills, meaning I had the strength and energy.
I told myself: make ten miles. Then I told myself, make it to Okehampton, and so on. I was hoping to make it to Tavistock, and I did, and more.
At Okehampton, I stopped at a bakery and bought a Breakie. Pastry with a sausage, thick bacon, slice of egg, and beans to keep it moist. £1.95 for all that. I bought a pastie to go, meat and cheese.
I had to climb to get out of town in order to get to the rail station where I picked up the Granite Trail. Eleven wonderful flat and beatific miles within the Dartmoor National Park. At Lynford stopped for water and to check directions. Tried to follow cycle trail 27. One part led me off road. No. But then as I continued (up) on the road my Google lady said I was still on the route. I continued on into Tavistock with a beautiful square. Pics to come.
Had an interesting lunchtime conversation with 2 young guys who wanted to discuss American politics and our fascination with religion.
Continued on to Callington, entered Cornwall and immediately began a steep push of the bike uphill for like a mile. I traversed the Tamir Valley. Finally after 50 miles I knew I needed to give myself a break. I rode onto Liskeard where, who knew, there would be no available B & Bs or cheap hotel rooms, or availability of any kind. Met a cyclist doing a JOGLE checking in at the Nebula Guesthouse. Threw out the idea of sharing, as he had booked ahead. He didn't catch my drift. So I left wondering what to do as my phone was also on its last charge. Rode past the Eliot House Hotel and said to myself, check anyway. They had one room left and I think the guy gave me a deal because the Nebula manager said they'd charge me 70. I got it for £55. I budgeted for emergencies and Cornwall is certainly that. Tomorrow more miles and more up hills. 56 miles today, and call ahead tomorrow. 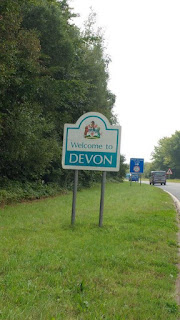 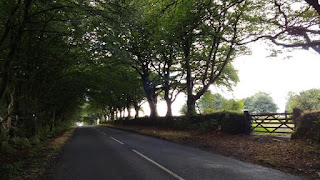