JOGLE Day 10, Ayr to Dumfries via the Doon Valley

Day 10, Ayr to Dumfries via the Doon Valley

I was trying desperately to close the gap, and do extra miles. I broke secret camp by the river in Ayr at 7 a.m. and headed out of town. I was so tired, and there was an uphill. I didn't have much in my tank. Just a rice yoghurt thing. Didn't bother to boil water for tea. At Patna, a sorry sort of town, found a bakery and bought two sausage buns for 1.90. Also made my tea. It was a slog to Dalmellington where I woke up. I was following the Doon Valley. I have an idea of the novel Lorna Doon, must revisit it. But at a certain point the valley narrows, you can imagine the highway robbers falling upon hapless travelers.I stopped at the Carsphairn Tea Room which was a welcoming place. After placing my order I said as an aside I ran out without paying once already on this trip. Then as I got up to go after eating my cake I said bye bye and the guy said, Aren't you going to pay? Sheesh.
The B road to Moniave was excellent, though a big climb was involved, traversing the Southern Uplands. The second half of the ride to Dunscore was downright pleasant, then there was another climb, and equally long descent. I made it to Dumfries determined to keep going and made it to the other side of town when a downpour came, along with evening traffic . . .and I had to reason with myself--is this safe. I had a warmshower host in my phone so called James last minute and out of the blue. James said YES and met me at the train station.
Now I'm clean, laundry is hanging up to dry, and there is a pizza party happening. 66.6 miles, and there is a plan for tomorrow! 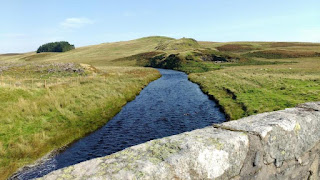