Well folks a few weeks back in an expression of exuberance I wrote that No News is Good News. I wasn’t at liberty to reveal I’d been sent a pub contract.

I heard what every author longs to hear: I love this!

With the state of publishing in flux and the Big 6 dwindling down to the Big 5 and Amazon gobbling up a chunk of the bookselling market and e-books at the point of outselling physical books (waiting for the most recent stats on this), I, the writer, the maker of “content”, am even lower on the literary food chain than ever. The writer above all is analog. Soon to be irrelevant. Akin to an antique.

Then on Thanksgiving weekend I received an e-mail informing me that the publisher was pulling the contract.

I know I’m not the first person this has happened to. I know of many writers who have even gone through revisions with editors only to be told their book project has been decommissioned, dropped from the list. Or, I’ve known writers who have gotten through revisions and their book is slated on the publishing calendar and then they learn through an e-newsletter that their publisher has been sold and the list is being “reconsidered”.

No wonder more and more writers are turning to Create Space or self-publishing through Smashwords, etc. Even when I had a contract (for those 2 ½ weeks) I knew that any and all promotion would be up to me. That’s how it is these days—unless you are the celebrity author with a ready-made platform.

Needless to say I was not thankful.

There are so very few tangibles in a writer’s world. Even words are nothing more than abstract letters on a page. The magic exists in a third dimension, along with the paranormal and miracles. I belong to the dwindling congregation that believes in the power of story. Books saved my life. I read to relax, unwind, and forget. Forget the world of commerce and financial aid and student debt. My contract certainly wasn’t going to release me from indenture hood, but for a few glorious weeks I carried a secret that buoyed my spirit, confirmed my passion, and gave me some inner confidence and credibility.

Okay, back to the grindstone. More than ever I feel like the Little Match Girl, peddling stick matches in a world of Bic lighters. 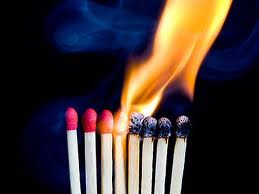 Posted by Jane Hertenstein at 11:58 AM 1 comments

I Wonder as I Wander

Even though I haven't had a foil-wrapped Ding-Dongs in years , I am still feeling nostalgic. 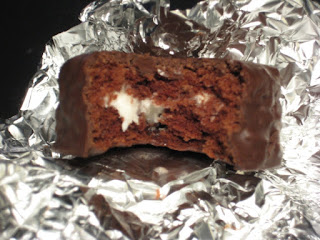 I remember as a kid taking a slice of Wonder bread, trimming the crust off like a lawn mower with my teeth, rolling the slab of white, crustless bread into a ball and then eating it. One time I ate half a loaf using this method. 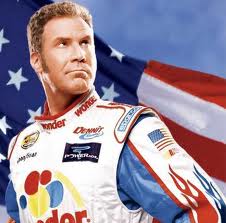 We lose another chapter from our life story.

Posted by Jane Hertenstein at 9:14 AM 0 comments

On vacation (a couple of weeks ago, just now getting my land legs) I probably took in 7 or 8 museums a day. Literally. This is easy to do in New York City and Washington DC. There might be one or two we missed. Maybe.

So in my crazy circuit of museum hopping (it’s all a blur) we were in the Hirshhorn Museum—one of the Smithsonians—and stumbled into an exhibit on famous Chinese artist and activist Weiwei “According to What?”

Exactly—according to what? There was a sandbox of sunflower seeds, or an installation consisting of a conflagration of sand crabs, like scarabs, flamingo pink and shrimp gray, massed up in a small gallery room. It was the kind of art that makes one question: What is art? 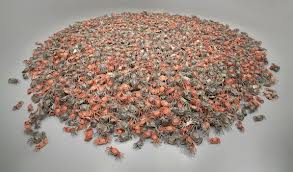 It provokes the response—I could do that or what makes Weiwei so great.

But, as one turns corners in the gallery, you keep running into things that boggle the mind, until even your own perspective is skewed. His box sculptures are out of the box. His world view is outside the box. Everything that defines this artist is out of the box.

Weiwei is most famously known for the landmark Bird’s Nest stadium in Beijing where the 2008 Olympics was held. 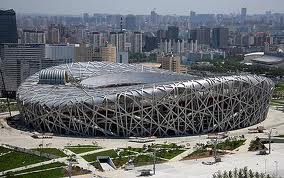 He was arrested for his representations of the Sichuan earthquake aftermath—where the government was embarrassed when it was revealed how many schools were shoddily constructed and 5,000 school children were buried alive. He had a sculpture in the exhibit eerily comprised of typical student backpacks. A way to remember those needlessly lost. He used rusty ribar to exemplify a geographic faultline. 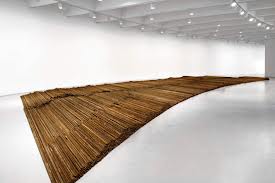 It’s not the kind of art someone is going to buy or showoff in their highrise apartment. It was meant to get under the skin, irritate the authorities. There were self-portrait photographs Weiwei took of himself as he was being arrested. 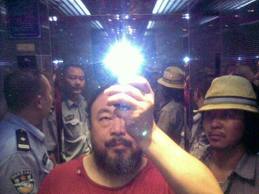 He also included a doctor’s x-ray of his head after he was beaten by police.

Another Weiwei method is to use traditional Chinese techniques to create art that is both modern and antique. Stuck into the middle of a stack of logs would be some brass fitting off a temple destroyed to make way for development. See—he just can’t leave it alone. Everything is a statement of how he feels living in the “new” China. 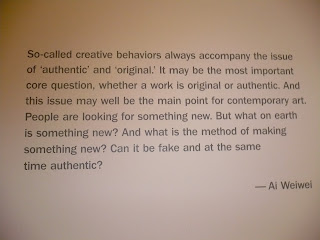 Anyway, since this blog is about memory, I copied down a quote from Weiwei about memories. Keep in mind he lives in China, a place that is in a hurry to leave its past behind, to move forward. In fact it is constantly reinventing itself. Chairman Mao was famous for his ever-revolving 5-year plans. At one time the countryside was deemed the backbone of the nation. Now it is the cities. Everyone wants to move to the cities and work in a factory. Here is what Weiwei said:

“The more quickly one is moving, the more frequently one grabs hold of memories.”

Weiwei is helping China and its leaders to remember, to not forget. Its children, the least of these, its elderly, the anonymous factory worker in hazardous conditions, the milk tainted with mercury. 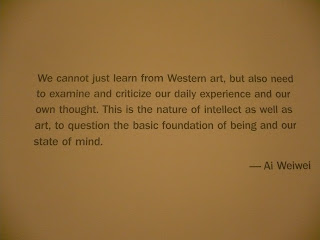 Email ThisBlogThis!Share to TwitterShare to FacebookShare to Pinterest
Labels: According to What, Hirshhorn Museum, Smithsonian, Weiwei


Last week I was walking through the park; the ground was thick with fallen leaves. Seems the series of recent storms have stripped the trees of all their leaves.

I think that particular day the sky was lead gray and the afternoon had already slipped into twilight. A mist was falling gently around me. Even though I am only 8 miles from the loop the ever-looming skyscrapers were lost in the low clouds. I felt totally alone.

Just me in the park and the soft thump of my feet plowing through piles of soggy leaves.

I remembered a conversation I’d had on the plane coming home from vacation. I sat next to a Chinese gentleman. We had in common daughters in college. He saw I had a book out on my tray-table and our conversation turned to reading. He said this time of year always reminded him of an O’Henry short story: The Last Leaf.

I’m not sure I’ve ever met another human being who has referenced that story besides me. 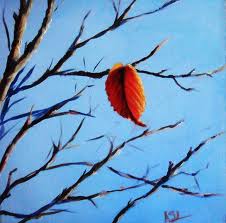 It is the story of two friends, both artists, trying to get by in NYC. I read the story as an impressionable teenager and I could totally identify with their pursuit and struggle to succeed against all odds. And there were quite a few. They had no health care and very little money for extras. Surprisingly, in recounting this story, it seems contemporary.

The once-popular writer O’Henry has fallen onto hard times, just like many of the characters he wrote about. He isn’t read all that much these days. So I was surprised to hear my seatmate talk about him and this little-known story. To be fair he also said he read a lot of Pearl S. Buck. In China I guess students enjoy reading washed-up American authors, the ones no one cares too much about today. Maybe in 30 or so years they’ll be turning onto Junot Diaz. Maybe just now they are discovering Kurt Vonnegut or Don DeLillo.

I’ve always had a special place in my heart for O’Henry. Call me old fashion, but I still enjoy a story with a twist or a sudden come-uppance (even this word indicates my addiction to archaic aesthetics). When I “grew up” and read more broadly, I was always slightly disappointed at how some stories just simply ended. Okay . . . . . ?

Furthermore (again who uses this word, still?) I’ve always loved the short story The Last Leaf. (Click on link to read) So I was thrilled to discuss it with my new-found literary friend. The ending is—surprise!! —bittersweet, revealing sacrificial love. I revisit that story almost every autumn, just as I re-read The Other Wiseman by Henry Van Dyke every Christmas. I keep it beside my stack of Ideals magazines. 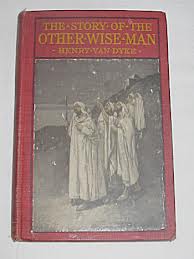 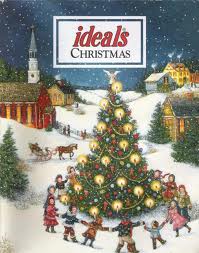 Posted by Jane Hertenstein at 11:52 AM 0 comments

In addition I have a PDF or epub for you to download if interested in publicizing the release (or my story!!)

The story is called “The Arrowhead” and is an excerpt from my YA manuscript of a forthcoming book, CLOUD OF WITNESSES—more news on this later.

Thanks so much—hope to hear from some of you. Always interested in feedback here at Memoirous. 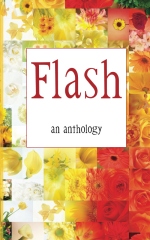 Posted by Jane Hertenstein at 9:52 AM 0 comments 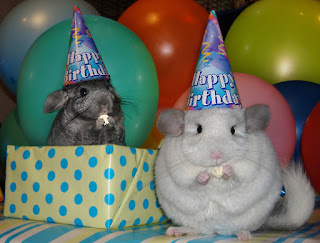 With all 50 states reporting--I can now confirm it is time for me to celebrate my birthday.* YAY!

*Paid for by people who appreciate kittens playing pianos and muskrats in birthday hats.

Posted by Jane Hertenstein at 6:45 AM 0 comments

No news is GOOD News

And a new story appears here 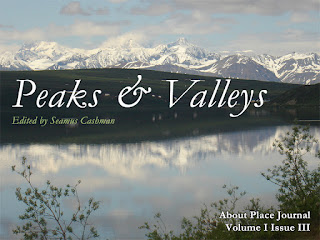 Now, late at night sometimes, when I’m lonely and afraid to sleep, I find myself thinking of St. Basil, resting there in the dark.
link to story

Also last night it was A Gift of the Magi—I decided to surprise my husband and went to the airport to meet his plane. I waited at the wrong arrival gate for 2 hours. I got home to find him waiting for me. Just like a turn of the century couple—the last century, not this one—we both have no cell phones. I flew into his arms.
Posted by Jane Hertenstein at 3:19 PM 4 comments