Not only do the Swedes use km to measure distance, but they also have the Swedish mile. Roughly 1 Swedish mile equals 10 of ours. I did about 5 Swedish miles yesterday. I also kept passing old mile markers that looked like cute little houses. Everything in Sweden is Cute (except getting lost, which that will be published later.) 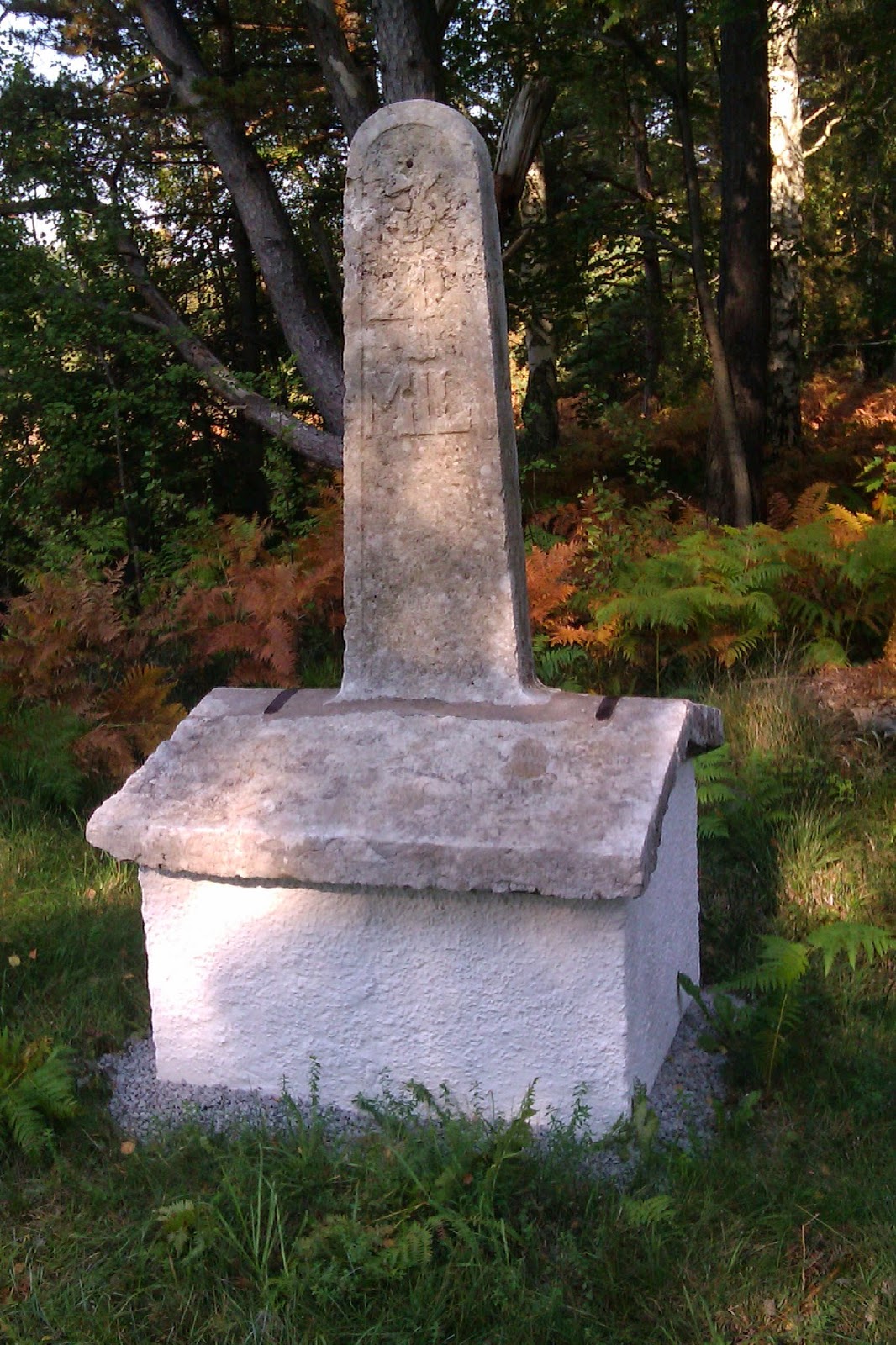 I kept cycling on, clocking km and swedish miles until I came to a point of interest. (Signs are very good, so far. Hopefully no getting lost.) The info board told me that during the Bronze Age there was a settlement here. Now just a heap of rocks. That is the problem with the Bronze Age. There was also evidence of modern man, lots of bits of tissue on the ground. That's the problem with modern man--we also leave our mark. Next I rode on to a church at the little town of Bro. It was quite old. Not sure when it was built, but set into the walls once again were stones with old writing. 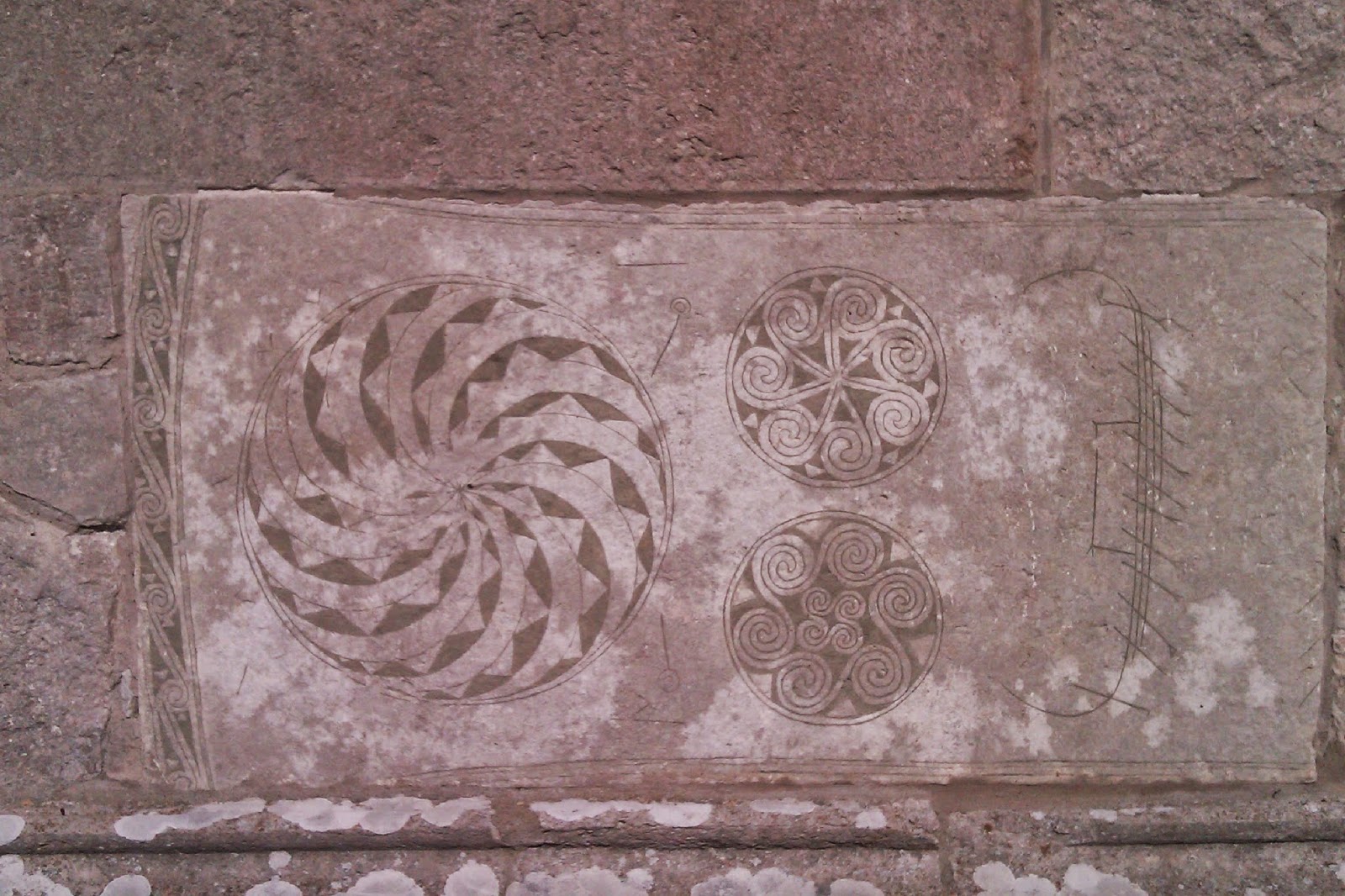 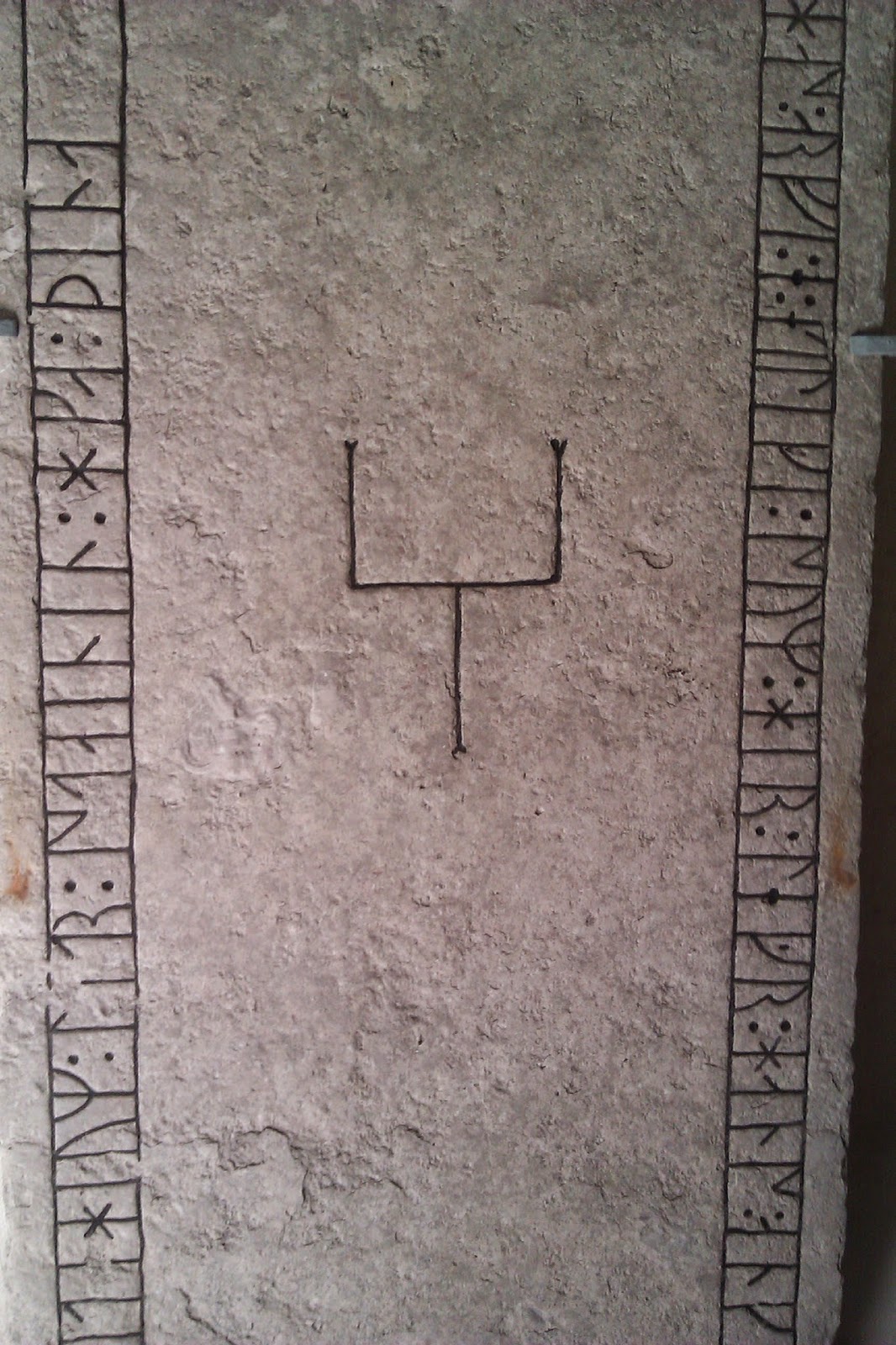 Notice the ship on the one above. Inside the church was colorfully painted. 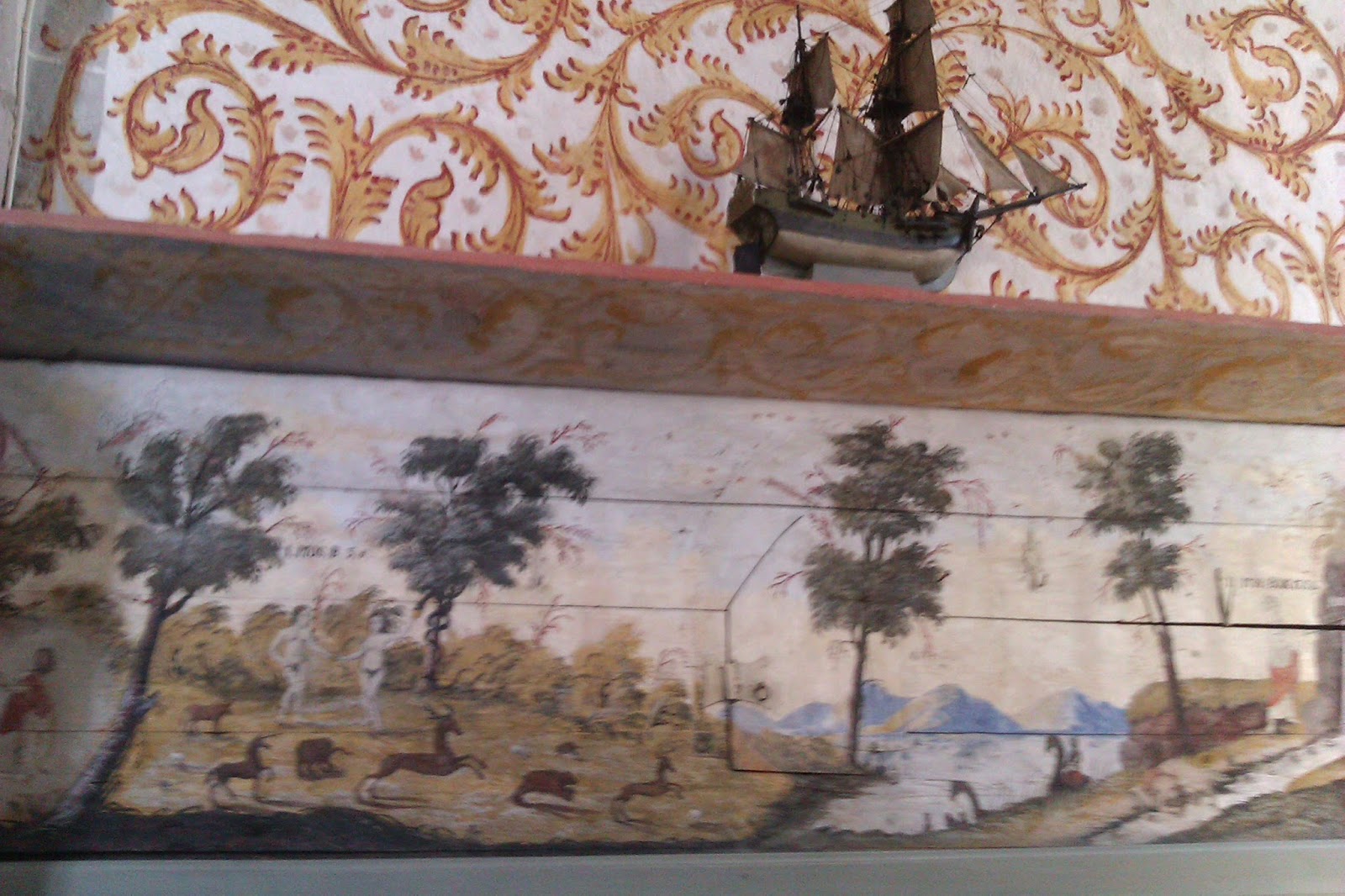 Notice the ship above the fresco. 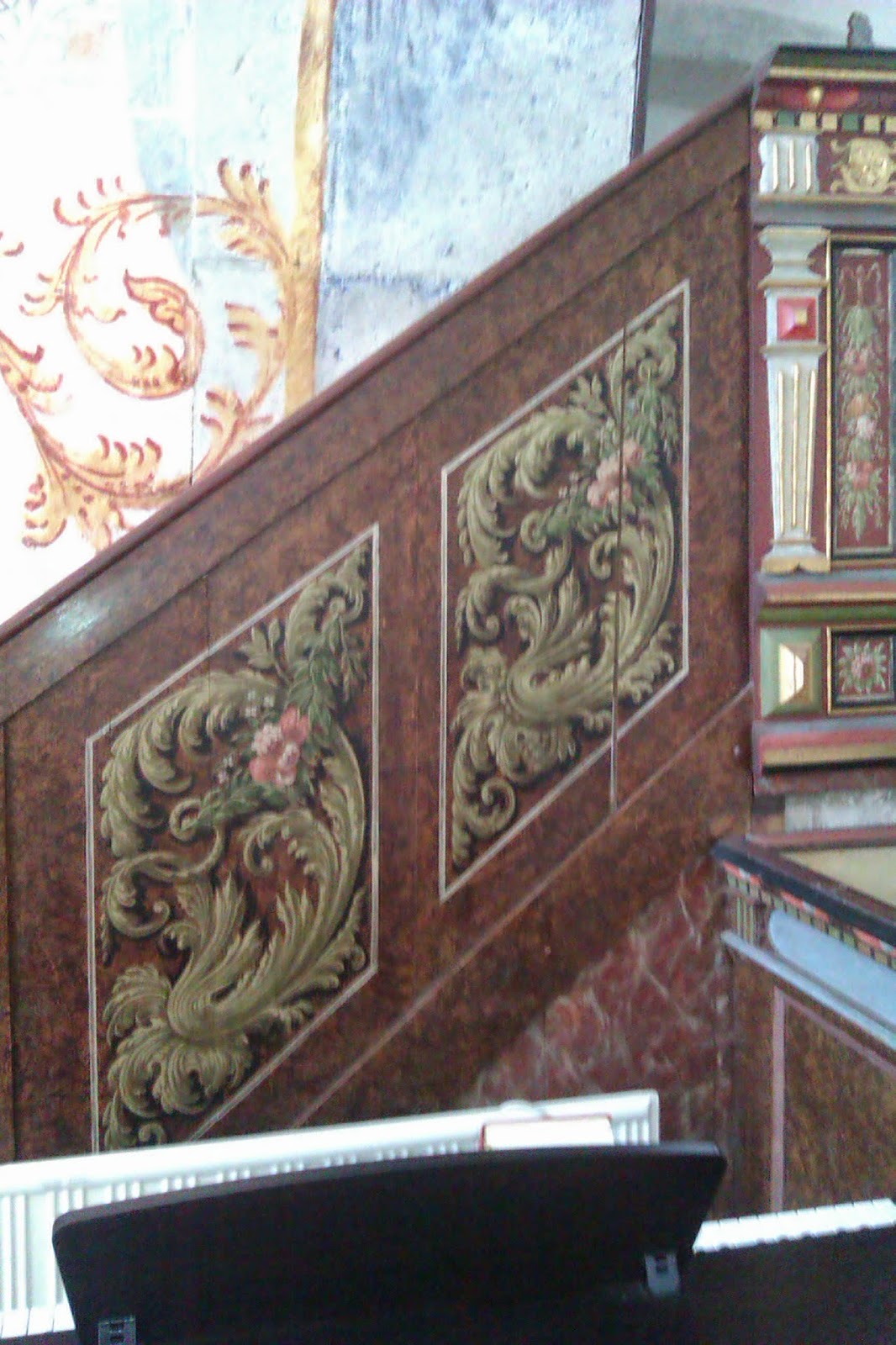 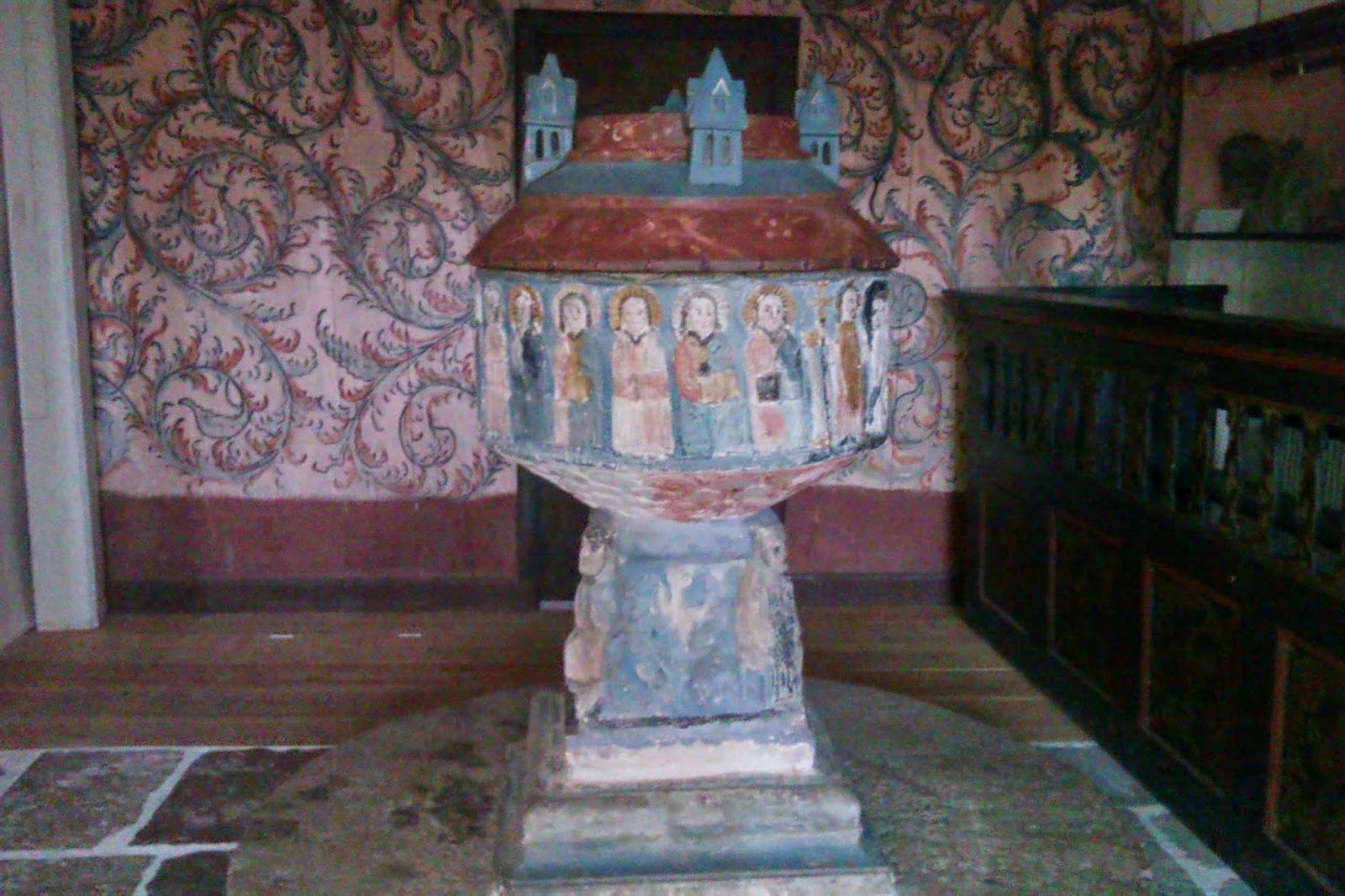 The bapistry above is my favorite.

Later on I passed another OLD church. Notice the cross above the grass-thatched roof. 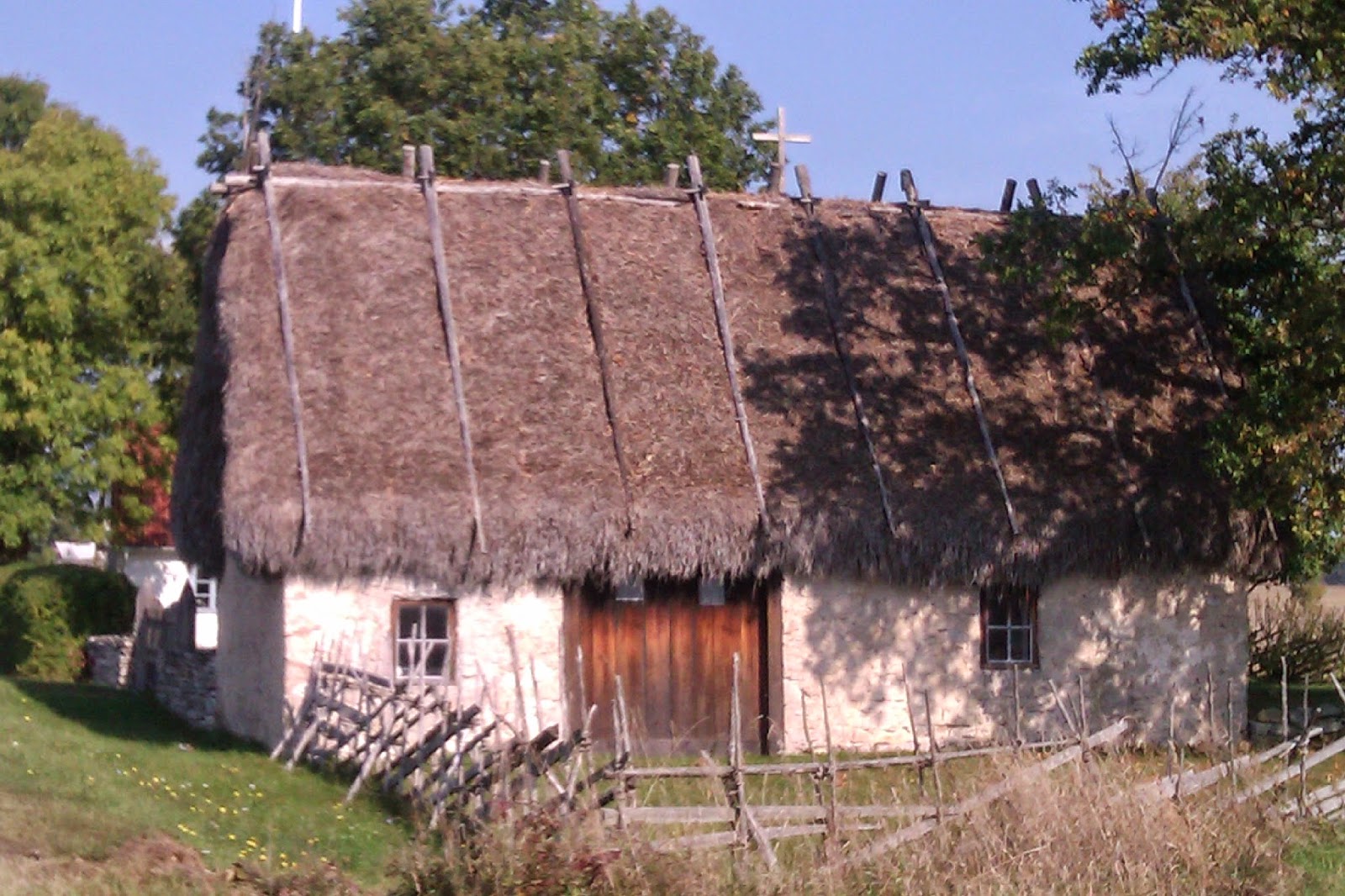 Around noon, while even more out in the country I passed the old Johnson Family farm, there was a sign in Swedish, but I knew they were welcoming people to stop. There were probably 30 cars in the parking lot and when I pulled in on my bike I was the only one not from there. There were a ton of people milling about. I bought a hot dog and watched a machine thresh some kind of wheat or flax. There were chairs set out for the old folks to watch. It was that exciting. They just sat and watched as if it were a film (Bergman?) 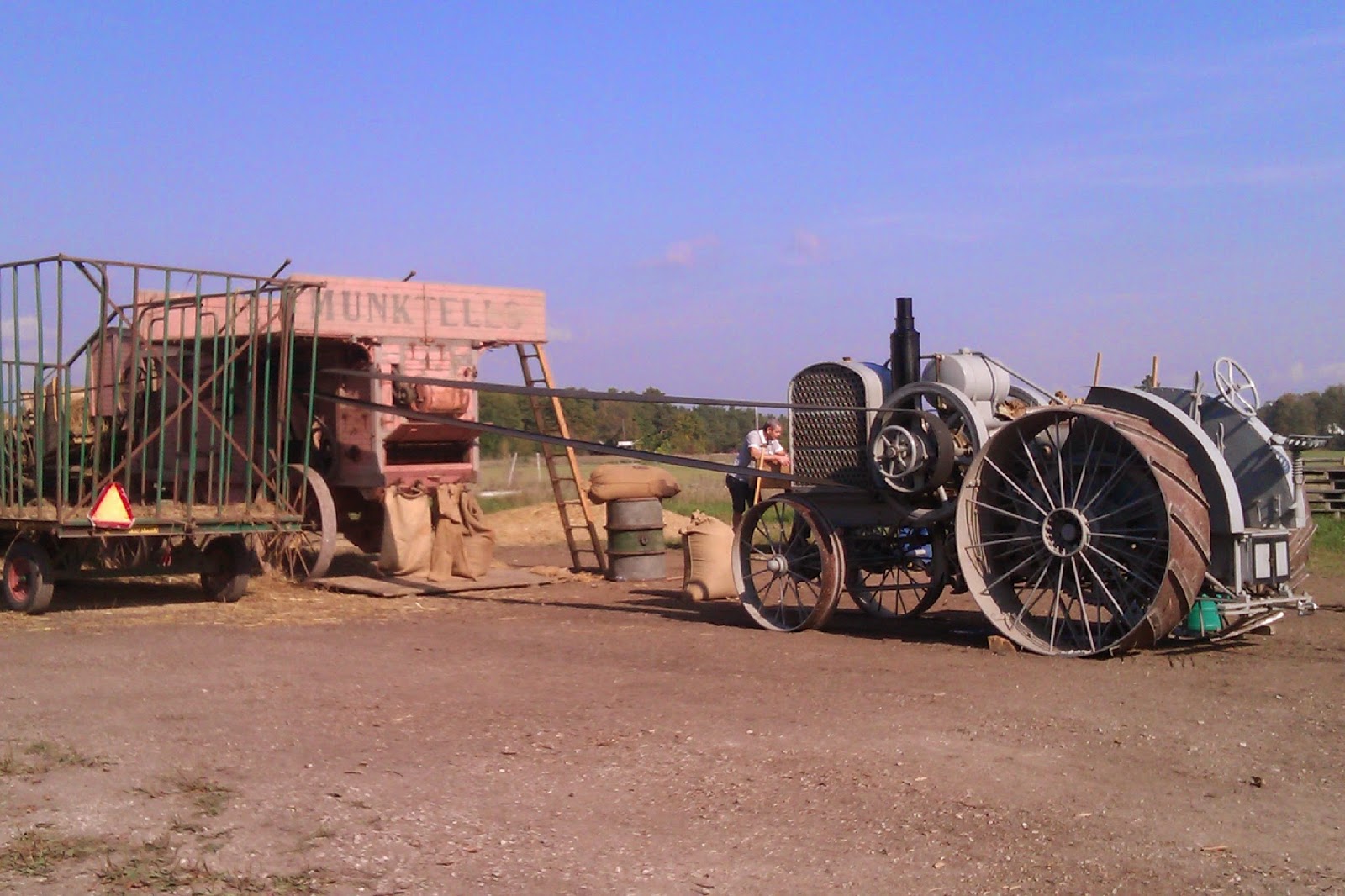 I stopped next at another small farm where there was an ancient point of interest. Standing stones, on some guys farm. Can you imagine? In the old days before they figured out what they were, they must of been a huge aggreviation. 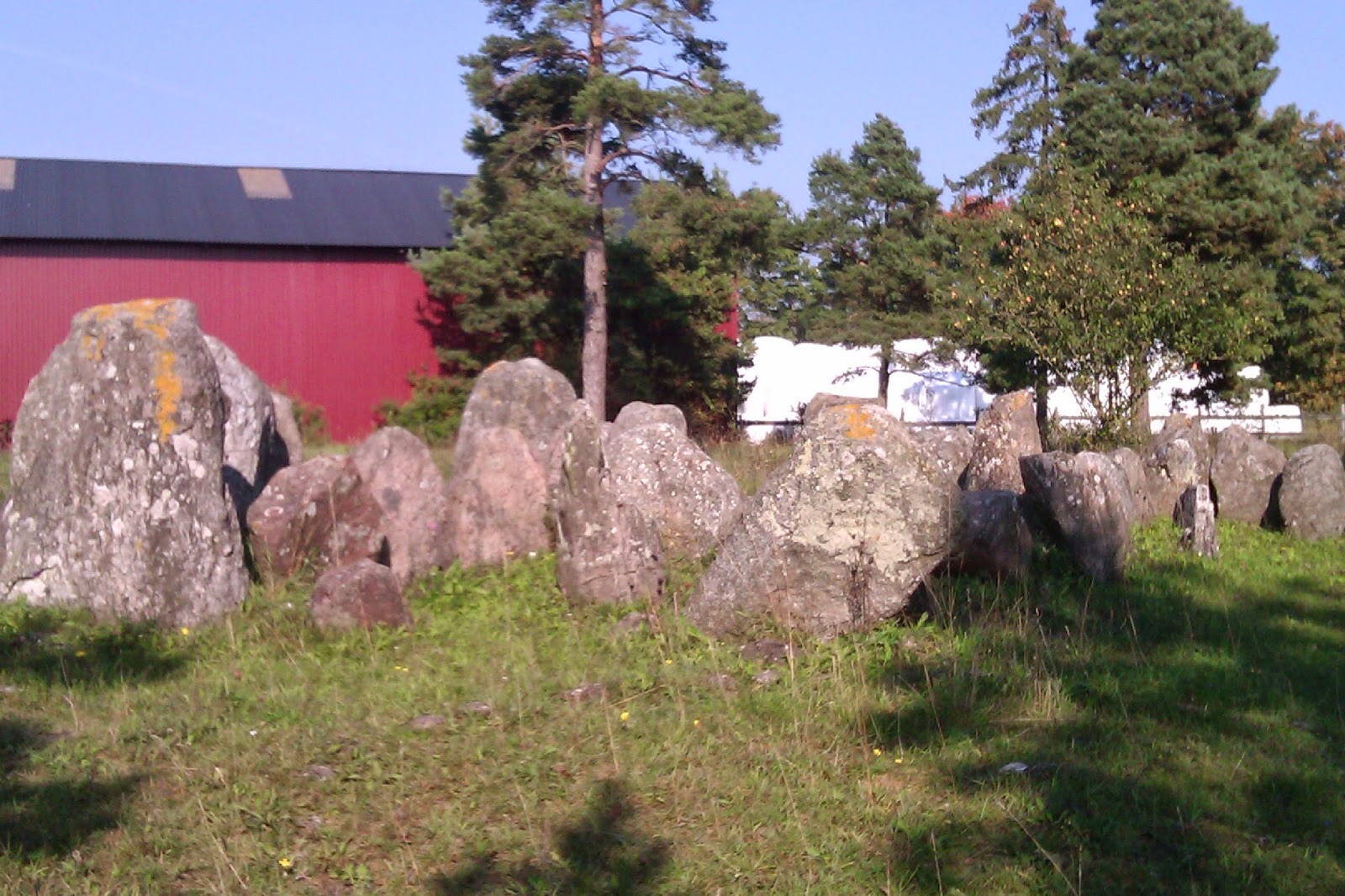 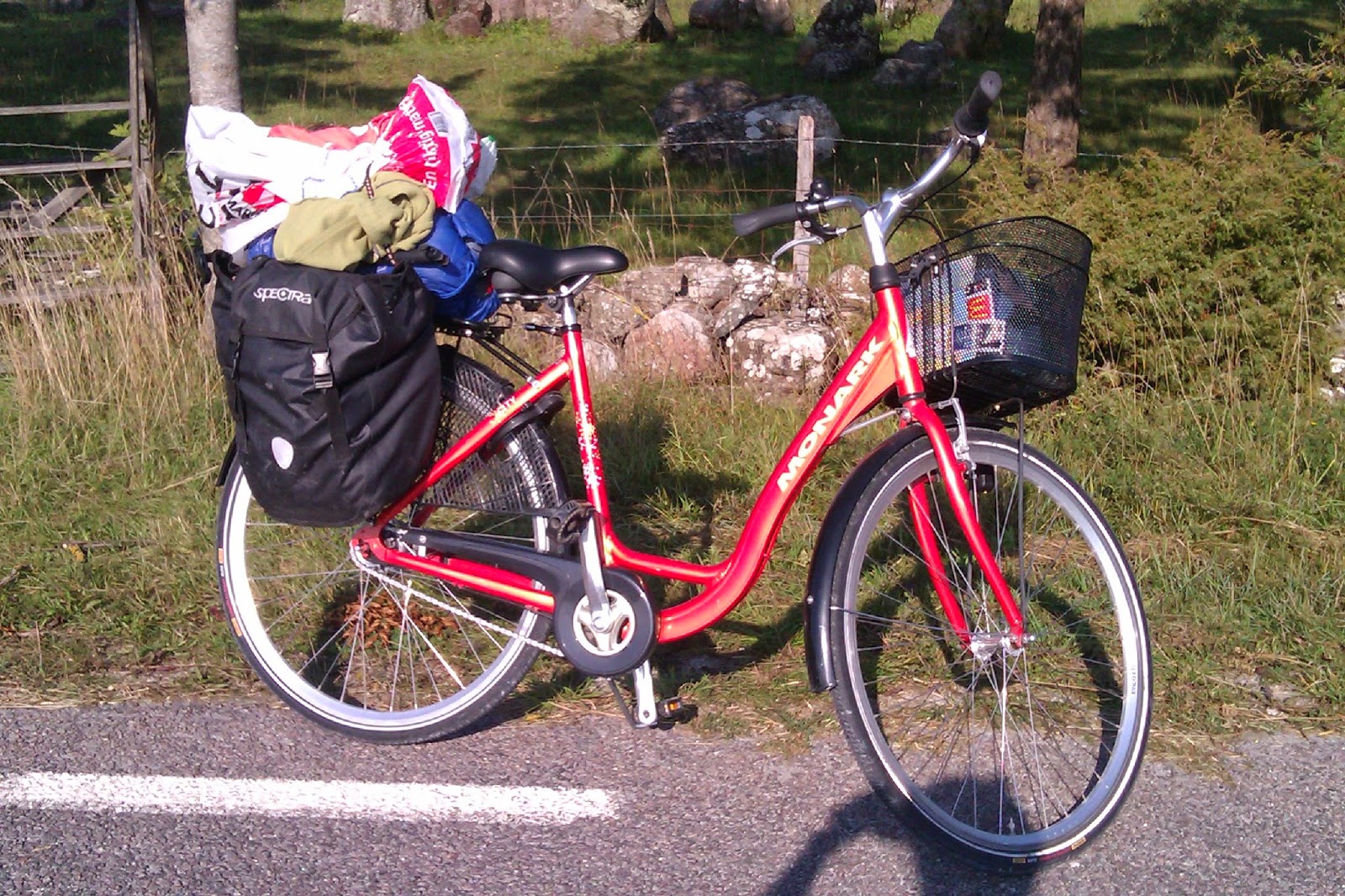 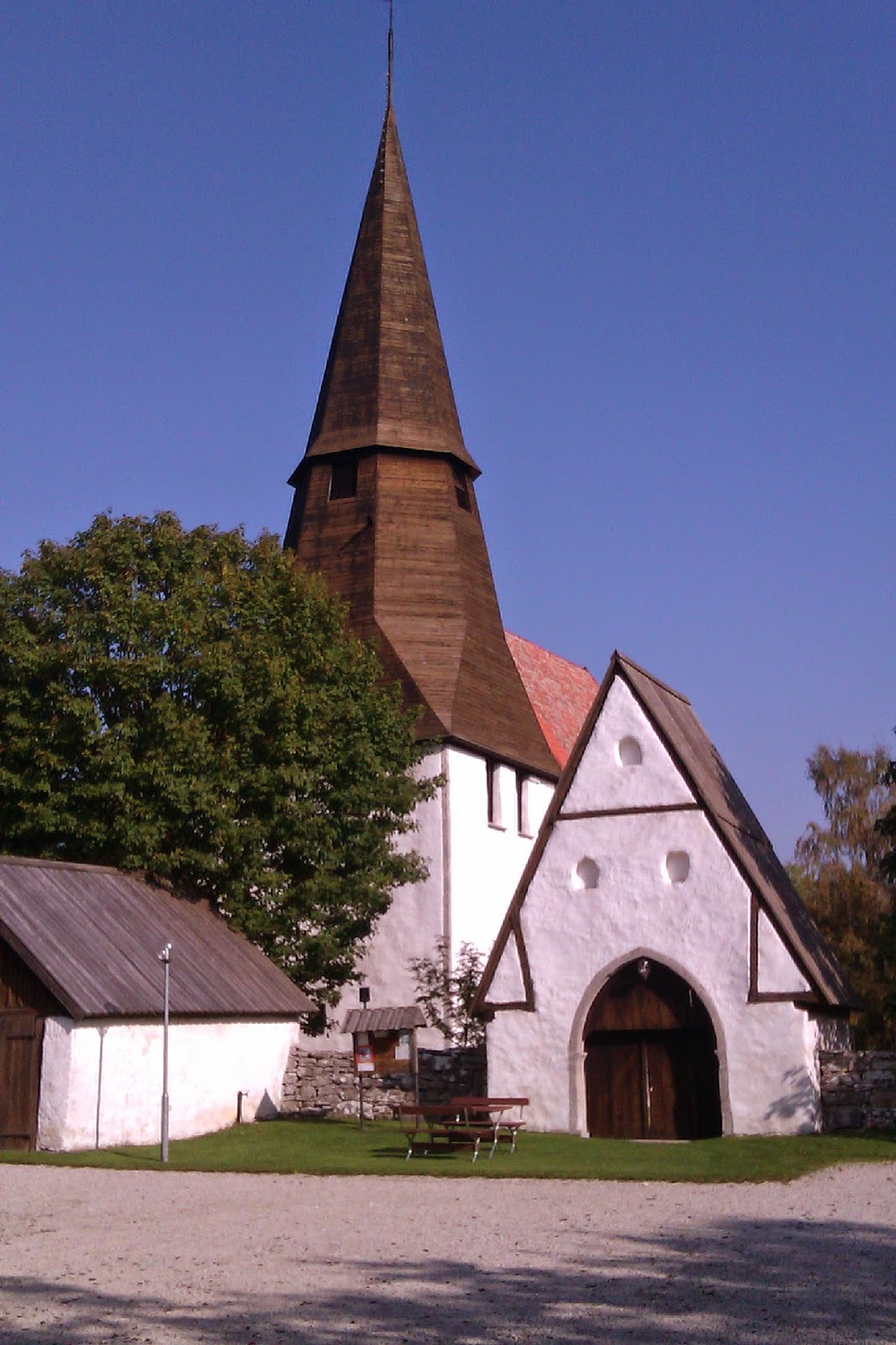 Above another kyrka. I just can't stop stopping at them to wonder and eat a snack, before going on.

Well, I got to Farosund, a town at the tip Gotland Island, where I was hoping to find some place to sleep. I'd been hearing again and again that places were closed for the season. The Swedish gods must have been looking out for me be cause I lucked into a wonderful, cheap place--and the best part is I have it practically to myself. Not only do I have my own room in which to relax, but almost the whole facility. It is called the Boot Hostel. Will definitely 're commend at Trip Advisor once home. Also the great people who rented me a bike in Visby.

The very lucky part, though, is that the other person staying here spoke to me in English and told me that for one night only on the other tiny island of Faro there was a kind of special night. A Faropallosa. So I hoped on my bike, went to the ferry, got over and rode a bus around all night for free, stopping at various places. One of which was the Bergman Center. Ingmar Bergman, the director lived out his last years on the island, and his journey rediscovering it was as happenstance as mine. Just luck. Below the outfits from Fanny and Alexander. 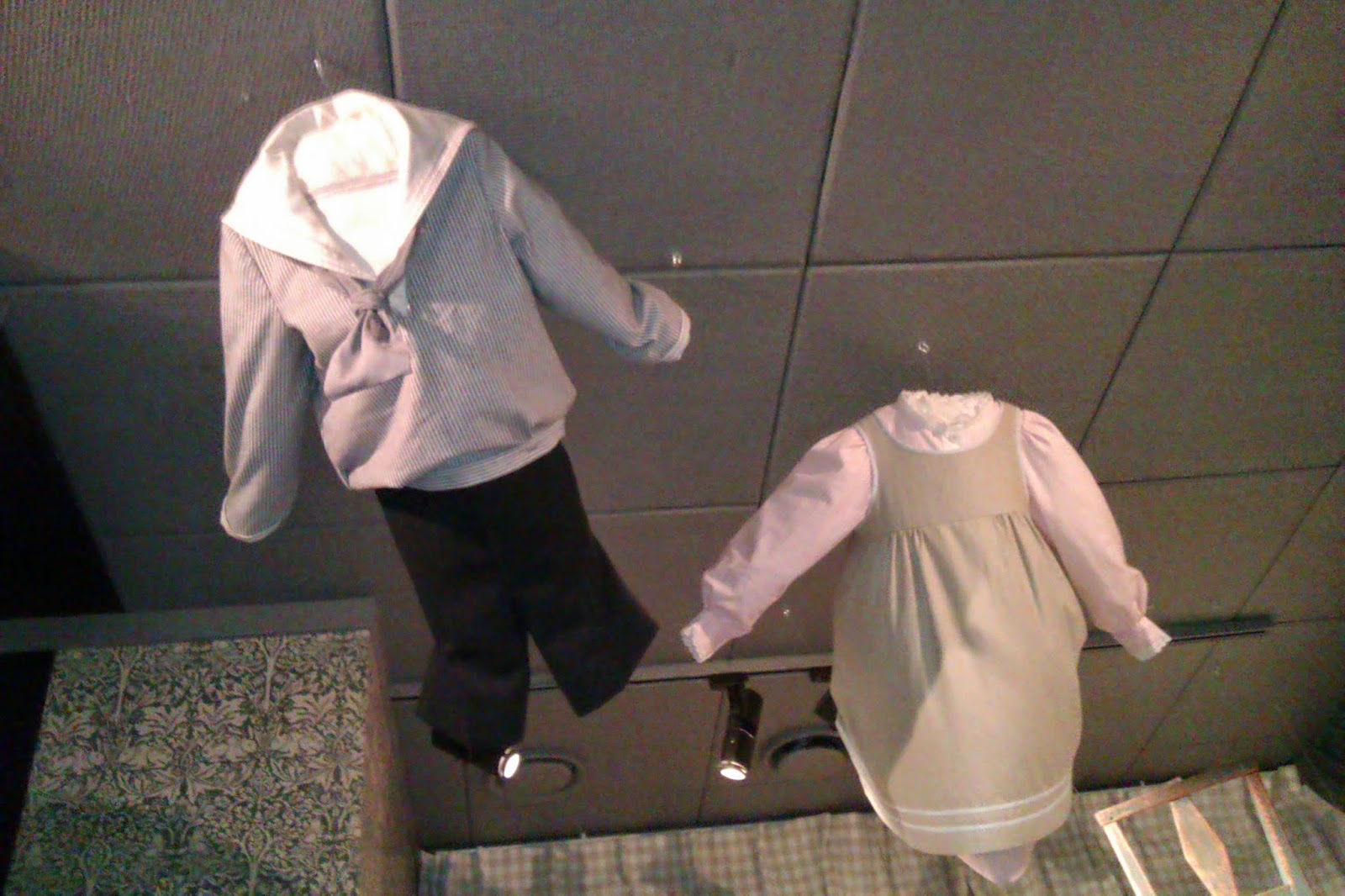 And I finished the night at the kyrka where Bergman is buried and a 10 o'clock service of special music and a choir. The church inside and out was lit with tiny candles. 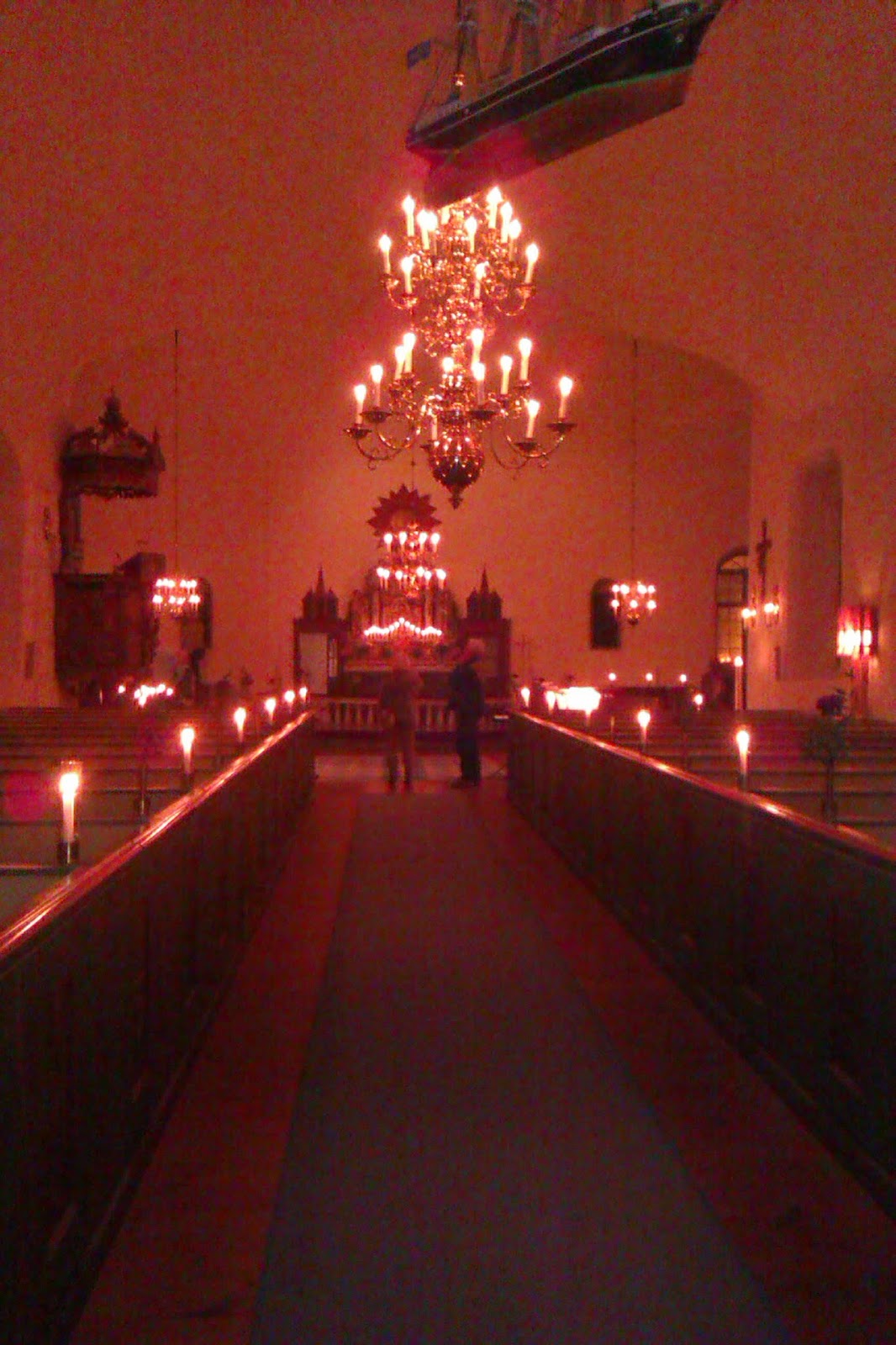 Posted by Jane Hertenstein at 1:53 PM