Just like many of you this past week I was sickened—yes, that’s the word I would use—by a video that went viral. Viral like a disease that’s infecting way too many in our communities. A good portion of our population. 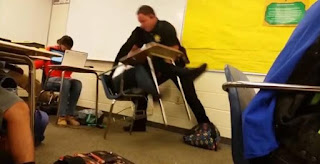 The same disease that drives some of us to download apps like GroupMe meant to spot potential shoplifters, but which turned into racial profiling. The same hair-trigger reaction that caused a shopkeeper to fear a really large black man approaching his store (he wasn’t even in the store because they saw him coming and locked the door) who turned out to be an NBA player.

The young woman’s crime: She was texting. Obviously other kids had their phones out because there are SEVERAL videos of this incident on-line. People text in their cars and they don’t get pulled over and thrown to the pavement. (I wish.) We are a society used to live-blogging, simultaneously walking, eating, and tweeting. Congress does it when the President is delivering the State of the Union address. So what is the deal here? How is texting disrupting a roomfull of students—anymore disruptive than say an officer throwing a fellow student onto the ground and straddling her?