Because I volunteer for the Chicago Humanities Festival I am allowed a few free tickets. This time I chose to go hear Pamela Smith Hill who is the editor of Laura Ingalls Wilder's Pioneer Girl: The Annotated Autobiography and Laura Ingalls Wilder: A Writer's Life. 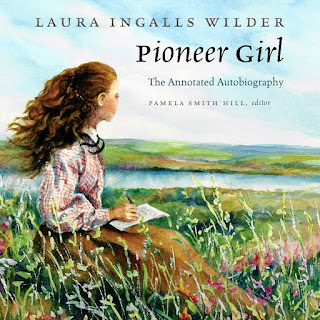 Hidden away since the 1930s, Laura Ingalls Wilder s never-before-published autobiography reveals the true stories of her pioneering life. Some of her experiences will be familiar; some will be a surprise.

Hill clues us in. Laura worked outside the home beginning at around age 9.Her and her sister Mary (before her illness and eventual blindness) washed dishes at a hotel her mother and father, Ma and Pa, ran. There were times when Laura was not safe. Pioneer Girl includes dark material, details of domestic abuse, love triangles, alcoholism, and a near-sexual assault. This was LIW first attempt at memoir writing and had an adult audience in mind.

It was only later, with her daughter, Rose Wilder Lane already a popular journalist herself, acting as her editor, proposed that her mother write for a younger audience, gear her writing for children and principally make changes that would give the books more of an arc. This would mean conflating some events and other changes to make it more readable. So in the end they would be novels. Not memoir.

Some of these changes are minor. Such as a scene from the railroad camp. Laura did not actually go with Pa; her observations were second-hand, as a railroad camp was not a suitable situation for a young girl--as there was rough language and rough men working there. But to make the story more interesting she wrote it through Laura's eyes. Other changes might be shifting her age around to make it more plausible that she might actually have vivid memories of a certain time period. Pretty much after On The Shores of Silver Lake the ages of the girls line up and also LIW self-editing of material not suitable for younger children was minimal, meaning she included more from the original ms Pioneer Girl.

One of my favorites of the series has always been The Long Winter, perhaps because of the struggle. It wasn't all Ma making do and making pies out of green tomatoes. There is a certain darkness to that story, where Pa stands up and shakes his fist at the blizzard winds and utters a curse and Ma has to hush him.

In fact we learn from Pioneer Girl that Pa was a bit of a scoundrel, leaving town without paying rent in one instance.

The real Laura did not live a sheltered life, but was hired out to other farm families to work and as revealed in her memoir Ma and Pa had an offer from a neighbor woman to take Laura off their hands. These were dark, lean times and perhaps they might have entertained that offer as there would be one less mouth to feed. But Laura also represented an income; she brought money into the family. In Little Town on the Prairie she is sent off to to teach in DeSmet County, she was not yet 16 and Almanzo was ten years her senior when he was allowed to drive out and pick her up. For today's helicopter parents this probably sounds CRAZY!

Anyway the Little House books are an example of blurred memoir, done successfully. The franchise has earned millions for the estate holders (a whole other story). Why not then you? Try setting down memories the Laura Ingalls Wilder way--give yourself freedom to finesse the memory and make it work as a story.