How many of you were captured by these headlines: Woman interruptsconcert to give the singer a bag of her possessions, taken from her tour truckin 1979

That’s right—someone gave Patti Smith her clothes back after 36 years.

This blog is about memories. How many memories are stitched into the clothes we wear . . . or used to wear? The dress you wore to your son’s wedding, your favorite sweatshirt that always gets rotated to the front of the drawer, the mini-skirt that got you through your darkest days after the breakup, that sheer blouse that always makes you feel ravishing, that hopelessly out-of-date tie that you somehow cannot bring yourself to forsake.

Who is it that said we are the clothes we wear?

But, styles change. Yesterday’s punk is today’s conservative. Remember your goth phase when everything you wore was black. I wouldn’t be caught dead in an 80s dress with poof sleeves. The free bins are full of fuchsia jackets with padded shoulders.

Nevertheless, it isn’t the style or even the fact that we once were skinny enough or bold enough to wear a certain item. It’s about what it represents—that young renegade, that girl who never said no, but always YES!!!

Once I wore a thrift-store find, a beautiful paisley sari, over black leggings. I felt so beautiful and confident . . . until my husband and I had an argument. I never could bring myself to wear that sari again. I eventually sent it back to the thrift store with a sack of other things I no longer had a use for.

When Patti Smith was handed on stage a bag containing clothes stolen from her tour van in 1979, when she peek inside the bag, she was brought to tears.

Forget the numerous questions or the possible recrimination: she was flooded with memories of that 1979 kick-ass Patti. This Patti: 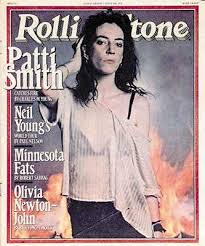 A clearly emotional Smith identified the top as the one she wore on the cover of Rolling Stone magazine in July 1978, and the cloth as belonging to her brother and road manager, Todd Smith, who died in 1994.
“Before long, half the audience was crying with her … [Some] were asking where, how, why, but Patti just put her hands out and said she doesn’t care how, she’s just so grateful to have these priceless items back,” a witness described in an online forum. “The rest of the program, after she piled everything on the podium, she couldn’t stop touching them, eventually slowly slipping the bandana into her pocket . . and proceeded to do a ripping version of Because the Night with her son on acoustic guitar.”