My Foreign Cities--or Places I Don't Want To Go

Lately thinking about mortality. Maybe it's because I have an impending birthday. Maybe it's because we're beginning to talk about retirement--not actually doing it, but the difficult conversation of "Are we ready?". Then there was the devastating news this week of a friend a few years younger than myself who got a terrible prognosis.

It's hard to talk about. In a phone call with my daughter who is only just getting started with all the big life decisions, I told her about my friend. Though she empathized and asked how I was doing, it wasn't something she could relate too. not yet. As it should be.

I remember as a kid my mom telling me about a friend of hers who had cancer. "In every part of their body." Back then cancer was synonymous with death. Most people didn't recover. I remember thinking that isn't this what old people are supposed to do. Die. But not in their late forties, is what I'd like to scream, right now.

But, in reality, death at any age is pretty unfair. It seems unnatural though it's supposed to be part of the natural process.

A book I read recently speaks to the issue of mortality and how it is an unfair master. The book by Elizabeth Scarboro is My Foreign Cities. It is about a young girl who falls in love with one of her high school friends, they date, go about their daily lives--and take the plunge to get married. Are they crazy!!?? He has a disease which will make the future untenable if not downright scary. But like two young and crazy kids they take the risk, and it proves to be doubly hard. Young married couples aren't supposed to have this kind of pain. It's unfair.

From a review from Booklist: Though Scarboro never idealizes the relationship—they can each be petulant and selfish—the power of the love she portrays is undeniable. With grace and humor, Scarboro shares the couple’s most intimate moments: her dismay at Stephen’s feeding tube, his dependence on painkillers, her grief-stricken decision to freeze his sperm.

It is a book that doesn't exactly have a happy ending, but one that reflects hope. 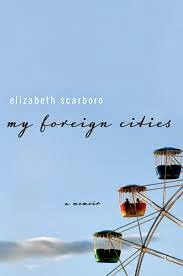 Posted by Jane Hertenstein at 1:34 PM