What happens when developers set out to create hip, urban art districts?

No there there. The kind of clunky, over-hyped monstrosities that artists usually RUN from. Just as real art is often the result of serendipity and chance, art districts emerge from an organic center rather than from city managers or top-down planning. An art district is not created from slapping up banners proclaiming “ART DISTRICT”.

In an article at Salon.com by Will Doig Salon article several factors have been identified that go into artist initiated art districts: 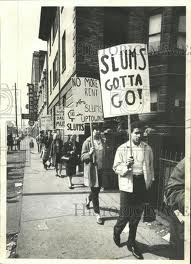 (That being said, when a neighborhood is cheap and, perhaps, a bit dodgy ie some crime, some homeless, some trash, etc it will attract artists and people wanting to open new kinds of restaurants. And eventually the neighborhood will change. The artists will make friends with the homeless, the restaurants will feed vets and people suffering from AIDS, trash will get picked up or recycled into art. Murals and planters will brighten up the dingy streets.

Once a “district” gets established it will continue to attract residents. The “right” kind of people will want to move in to take advantage of the hip, urbane atmosphere created by the artists. Because it is now a neighborhood on the edge, property rates will be reasonable, so more of the “right” kid will buy in. Within a few years the whole place will flip or gentrify. Mission accomplished—

Except then the artists will be priced out, and the residents will say “not in my back yard,” and the neighborhood associations and Chamber of Commerce that the restaurants now are a part of will declare war on the homeless and fringe element. There will be talk about property values and better schools. The movement that brought so much to that neighborhood will move on; all that’s left are the banners hanging from lightpoles declaring it an “ART DISTRICT”.)

This year is the end of Cornerstone Festival. It is bittersweet. The sadness that surrounds the end of the festival goes hand-in-hand with fear. I’m afraid of what next will end. We are truthfully on the brink—maybe we always have been and we just haven’t recognized it. Maybe this is the essential problem of “man”: mortality.

But at the same time we’re free to begin something new. This isn’t simply spin. Some parts we know about and other ideas are still in their infancy, roughed-out stage. So stay tuned for details. More fringe to come . . .

Posted by Jane Hertenstein at 9:06 AM