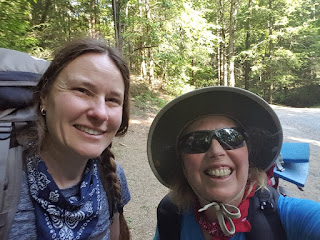 Last week I went back to my roots: backpacking.

Also my parents used to live in Tennessee and I have spent a lot of time in the park. When they moved back to Ohio around 2007/8 I thought my time in the Smokies was finished. On top of that my hiking partner moved to Minnesota, so that seemed to seal the deal.

Until I got a hankering--and my feet fixed (see post). I contacted my friend to see if she was available and when the stars aligned I cooked up a plan. It's always good in the dead of winter to have a spring plan!

After picking her up at the airport we drove almost to the park and camped one night in the Daniel Boone National Forest (Holly Bay campground). I always find tent camping most exciting when there are bear boxes and Bear warnings. We did not spy any bears--we only heard birds in the mornings. We knew we were below the Mason Dixon line because it suddenly was no longer cold.

Upon arriving at the park we cycled the 11 mile loop of Cades Cove and trekked to the old farmhouses etc. After that we jumped back into the car and drove to Gregory Ridge Trailhead. By this time it was 6 pm and we had about 2 miles to hike. Though fairly level, we were dehydrated from the hot ride and had to scramble under fallen trees. The 2 miles paralleled a rushing stream. We set up camp at site 12 and quickly got a fire going and cooked up a supper. It was dark by the time we stowed food and "smelly" stuff up on the Bear truss high off the ground. 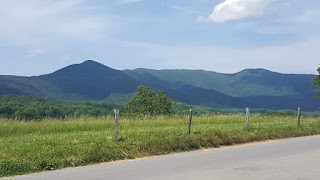 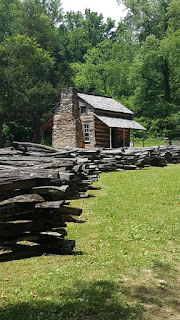 The next day we hiked 4 - 5 miles pretty much all UP. We averaged about 1 miles an hour which I thought was bad until a group of guys told us it took them 1/2 mile per hour. When we got to Gregory Bald we were relieved: it was a lot cooler and we knew we were almost to our campsite, just down the hill to #13. We arrived early enough in the afternoon to set up a hammock and do some handwash. I'd forgotten how much you sweat when carrying a pack. I was drenched. We laid around and read and rested. That evening we went back to the Bald for some sunset pics. 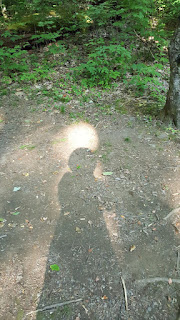 The next day we hiked 4 miles out to a seasonal road that was still closed and then about 4 more miles to the trailhead parking and our car. We quickly got into the car AC and then drove to the OTHER side of the park to the Greenbrier district to hike up Porter's Creek trail to another campsite. By the time we arrived at #37 it was almost 7:30. Again the whole way up there was a rushing stream--yet at the campsite access to water was difficult. One would have to rappel down 20 feet, after doing a GI crawl under a huge fallen tree.

To say the least, we conserved water and made-do with what we'd hiked in with.

Now we were done with hiking. We headed out on route 321 and saw a sign HOMEMADE APPLE PIES and pulled into the Kyle Carver Orchard where there was a restaurant with hi-carb food--just what we needed. Before even placing our order they brought fritters and apple butter and apple cider in cups to the table. We ordered turkey and dressing with mashed potatoes and corn. It came with strawberry shortcake, biscuits, and a drink. Let me tell you!!!

We were a wreck and looked it. I went into the bathroom to freshen up after ordering to find dirt and bug carcasses in the creases of my neck. Sheesh!

Now I feel ready for more hikes--maybe in cooler climates. 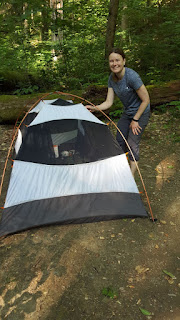 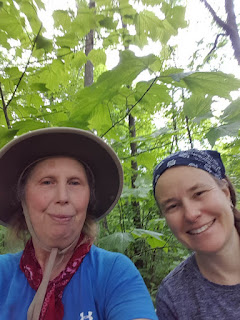 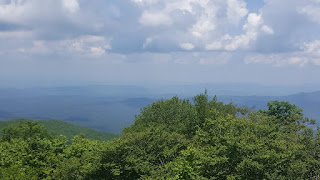 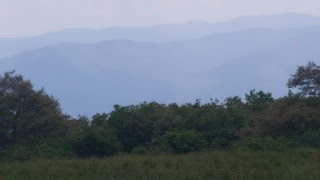 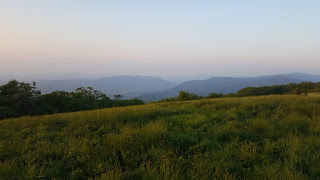 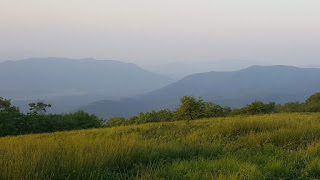 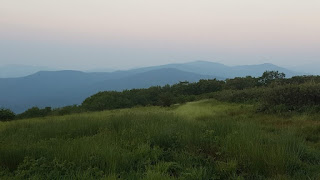 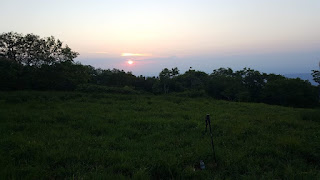 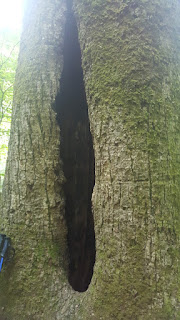 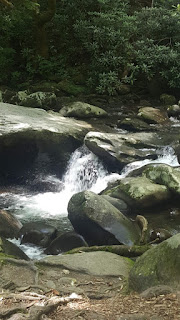 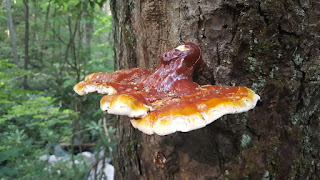