If you read back through my half dozen bike diaries you’ll soon see a pattern: I don’t really know how to fix my bike. Plus I’m a scaredy cat about it, but necessity is the mother of invention. Maybe not invention, but of working around problems that do come up.

Tire repair: I’ve already relayed here how much I hate changing a flat. Never mind repairing an inner tube while on the road. Anyway, I do know how, it’s just doing it that’s hard. Always carry a couple spar inner tubes and a pair of tire irons. Now a days there are plastic ones in cool colors that stick to each other and are handy.

Brakes: there’s a tumbler on the side that widens and narrows so that you can tweak any kind of rubbing. I also use that thing that throws them open for removing the tire without deflating it. For replacing the pads I’ve got the kind that are already set for the right angle and all I have to do is loosen and insert fresh pads. The one thing I do know is that you have to replace BOTH sides. (Not both front and back, though often this is the case too.)

Cable snapping: this has happened and there’s nothing to be done except replace it. Some people carry an extra. I’ve never found this necessary as I’m never too far from a shop.

Lubricant: super important, yet super inconvenient when flying. You aren’t allowed to carry any kind of chain oil etc. so must buy this first or second thing. In Nova Scotia I had some problems finding what I needed and with all the rain I was afraid of my chain rusting. I went to a hardware store and read labels and bought an aerosol spray. You want something that doesn’t collect a lot of dust and grit from the road, but yet covers. There is wet and dry lube, and some intermediates.

This about covers most of the stuff I’ve run into. I carry a hex handy tool with several sizes and a couple loose screws in an old sock so that they don’t roll around in my bike bag. Hopefully, this info will help you in deciding if you have the basics before taking off. Performance bike shop often offers free workshops with their “spin doctor” that have come in handy, and also the local bike co-op offers classes for basics, fine tuning, and for women (and those who identify). Search for these resources online. 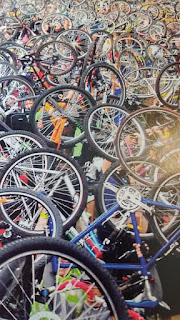