“Some memories are realities and are better than anything that can ever happen to one again.”
My Ántonia

A book I seem to come back to again and again is My Ántonia by Willa Cather. Often I don’t have time to read all the books I want to—so why do I continue to re-read ones from the past?

Always I am seeing something new, or traveling back over worn roads that in their familiarity call me home.

Some reduce My Ántonia to an immigrant’s story. It is Jim’s the narrator’s memoir as well as the story of a Czech (Bohemian) neighbor girl. Or cast in another light—we are all newcomer’s to a place we have to conquer and eventually tame, we all strangers here.

I love Cather’s work. It is her descriptions of place that transport me. In Death Comes for the Archbishop we read about New MexicoppLand of Enchantment, of pastel pink clouds, golden sunsets, of sagebrush mesas and waterless arroyos, of Kit Carson and horse thieves. It also contains many racial stereotypes and assumptions that native Indians were children looking for a religion to which they could devout themselves. Yet, it is also the story of enduring friendship between two Frenchmen called from their homeland to serve along the frontiers of the new West in America. Memory plays a large role in telling their story.

Memory also is how we learn about Ántonia. The whole story is one giant recollection, told through the pen of Jim Burden. He seeks to relive his childhood and growing up years in rural Nebraska. He takes us down roads and over grassy swells. “There was nothing but land; not a country at all, but the material out of which countries are made.” For him it is all gone—for us we have never even known a time without highways, internet, supermarkets—Jim remembers a time before fences, before the sod was broken, and the grasslands plowed under, and when he returns he sees that even Ántonia is a little worse for wear, having lost her teeth and aging beyond her years.

“Antonia came in and stood before me...It was a shock, of course. It always is, to meet people after long years, especially if they have lived as much and as hard as this woman had. We stood looking at each other. The eyes that peered anxiously at me were - simply Antonia's eyes. As I confronted her, the changes grew less apparent to me, her identity stronger. She was there in the full vigor of her personality, battered, but not diminished...”
It is a memoir of nostalgia where the past is romanticized. My heart can’t help breaking when Jim remembers the good-natured cowboys Jake and Otto that helped out around his grandparent’s farm. How when they left when the old folks moved into town, Jim would never hear from them again.

In the course of the story we read about other settler’s memories. Ántonia’s father is debilitated by his memories of the old country; he longs for what he has left behind. While Russian Peter is petrified by the mistakes of his past, continuing to live a life of regret.

One of my most favorite images from the book is a story Jim tells of going on a picnic with Ántonia and Lena right before leaving for college. The sun is hanging low in the sky and captures perfectly a symbol for his childhood and the Great Plains. “There were no clouds, the sun was going down in a limpid, gold-washed sky. Just as the lower edge of the red disk rested on the high fields against the horizon, a great black figure suddenly appeared on the face of the sun. We sprang to our feet, straining our eyes toward it. In a moment we realized what it was. On some upland farm, a plough had been left standing in the field. The sun was sinking just behind it. Magnified across the distance by the horizontal light, it stood out against the sun, was exactly contained within the circle of the disk; the handles, the tongue, the share—black against the molten red. There it was, heroic in size, a picture writing on the sun.”
The book ends with Jim returning to visit Ántonia now a grandmother. He follows the old roads back—“As I went back alone over that familiar road, I could almost believe that a boy and girl ran along beside me, as our shadows used to do, laughing and whispering to each other in the grass. . . . I had the sense of coming home to myself, and of having found out what a little circle man's experience is. For Ántonia and for me, this had been the road of Destiny; had taken us to those early accidents of fortune which predetermined for us all that we can ever be. Now I understood that the same road was to bring us together again. Whatever we had missed, we possessed together the precious, the incommunicable past.” 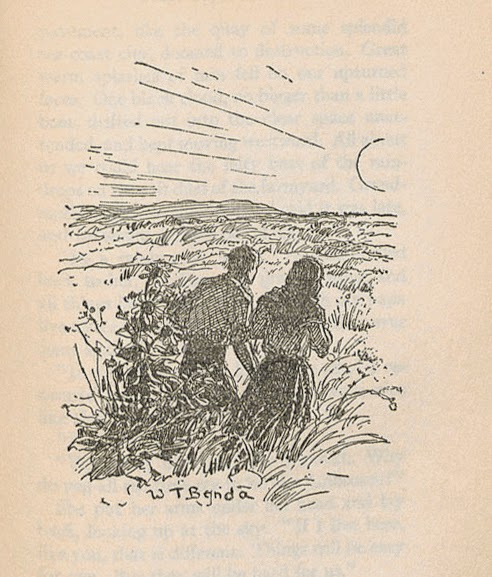 Posted by Jane Hertenstein at 8:13 AM