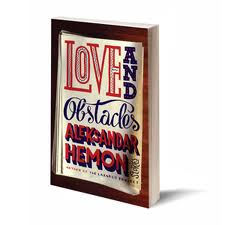 In reading Aleksander Hemon’s collection of short stories (linked?) Love & Obstacles I am at once struck by the similarities of his bio and the presumed narrator of his stories. It is also hard to write this review without unintentionally applying the weird angles with which Hemon comes to the English language; I keep wanting to write in choppy tourist-ese, a beguiling translation from an original language into what is English but without the usual syntax and adjectives a person who has spoken English all their life would never employ. I saved as a souvenir some tour notes a guide handed to me before I boarded a bus in Montenegro to go to Albania. My husband and I in a desperate attempt to get to Albania booked a tour from a kiosk along the beach promenade in Budva. “What do you mean you don’t want return ticket? No one stays in Albania!” We also declined the “adequate lunch” as we wanted to save a few Euros.

As someone who is mostly against war (whatever confusing hypocrisies that “mostly” entails) the Bosnian War (but what about the Croats, the Serbs you may ask!) whatever the war was called, a war for Independence or a war to Preserve the Union—as a pacifist American the conflict made no sense. And, later, traveling between Croatia and Montenegro, and the bits and pieces of the Yugoslav break-up, as an outsider I could discern no real difference. Except at the border. All these different passports, such colors, and everywhere the double-headed eagle.

In all his books Hemon has been able to ably convey that he is a Nowhere Man, a foreigner American, new to English yet a master of the language, an immigrant who knows us better than we know ourselves. He is a communicator, his stories hit us in both a place we recognize and know nothing about at all. Some call it the soul.

With his stories there is always a before with an unmentioned after. Yet it is out there, lingering in the shadows. His stories are thinly disguised memoir, where the “I” character is a stand-in for Hemon, in one form or another, or perhaps he is a stand-in for a story he’d heard or for a friend from that vanishing circle of friends. They are nostalgic in the fullest sense of that word, warm reminisces that hide the real truth, a fractured reality that wakes us up in the middle of a seductive paragraph.

So I checked the front matter. What? Why? Maybe like turning over a photograph to see if the figures are identified or the event possibly dated. The book was copyrighted 2009. And, for some reason (What? Why?) I thought these stories were likely written before the financial crash. Before life got hard and then real hard. Before we knew what was coming. Before we cut back on meat or started saving ridiculous things “just in case.” Before my parents died and before (as I read later) Hemon’s second daughter, only 1 years-old, passed away.

I enjoyed his stories very much, but cannot help imagining what they’d feel like without the war, without loss, or even the crash. They strike a cord that resounds with laughter in the face of grief, that despite hardship: now is all we have.

I highly recommend Love & Obstacles, and maybe start near the end with “American Commando” for his version of dissociation self-revelation.
Posted by Jane Hertenstein at 8:19 AM