Last week I got caught in the rain 4 times on my bike. Not normally a big deal, but Chicago has already had so much rain that I try to get out between showers. Sometimes it looks perfect and I think to myself, Stop being a slug. Get up and go downtown!, and literally ten minutes later it’s pouring. When people see me come in dripping wet they act like I’m so hardcore to ride in the rain. I want to tell them, No, I just need to get home and that’s how—on my bike.

So then there was this past weekend.

I wanted to take advantage of a weekend without rain in the forecast. OK, there was a 20% chance, but that’s 80% chance of NO rain. And it’s finally warmed up. The average June temp in Chicago this year was like the low 60s. So meteorologically it looked like the stars were aligning for a two-day ride and camp out.

I met a woman at the Bikes of Wrath movie (see link for review). It was a movie about bike touring and afterwards I came out to the parking lot to see someone looking at my bike. She was cute and little and said, I have a Torker too! So we talked bikes for a moment. Then I said, I need to start riding home, if you’re heading north let’s go together. She said she lived north. I said I lived in Uptown. So did she. I said I live by Sheridan and Wilson. She lived in the building behind mine. So after we made it home we exchanged details to ride together whenever convenient. So far we’ve managed a few local rides. So when I mentioned a bike camping weekend on the I & M Canal Trail she jumped on the idea. 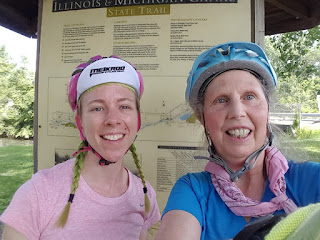 Really it started great. I was so happy to be out on a trail, in nature, hearing birds, pedaling away. It was hot but manageable. We stopped every so often for snacks and to buy drinks. I’ve ridden the I & M many times. But I haven’t ridden to the end of it for many years. Possibly 4 years ago and I remembered that after Seneca it was a bit rough. We finally decided to take the road into Marseilles and Ottawa. It went from a wide track, to a single track, to an unmowed slice. Grades going down to railroad tracks were chunky gravel and washed out. It might have worked for a mountain bike without packs.

Outside of Ottawa is where things broke bad. Suddenly the heat was oppressive. Humidly made it feel like I was swimming in slow motion. We hit a long stretch of mud. More like sticky clay, which seized my back tire and I slammed to the ground, into a puddle. I had blood flowing from my elbow and tried pushing my bike forward as mud gummed up the brakes. As mosquitoes lighted on my arms and back, biting through my shirt. The mud was so deep and sticky my shoe sunk in and I had to suction it out. Step by step. Finally we made it to hiker/biker camping and I got a chance to use bug spray.


The next day nothing was dry. I packed up a damp tent and put back on my wet clothes hung out on a line to dry. We went back through the mud and in Ottawa took about 20 minutes to wash bikes off with water bottles at a pump. It was already hot. By 20 miles I felt exhausted. After 30 I felt like I had asthma. I would pause after every miles breathing hard over my handlebars. I was drinking, but obviously not enough. Rian turned on her phone (we set them on airplane mode to save on power). In Ottawa in was 104 degrees! Where we were it was 94. No wonder I felt terrible! In Morris I bought a drink. I wasn’t at all hungry. Really, I needed air conditioning.

We kept going as we wanted to catch the train in Joliet. In the distance we heard thunder and the sky was blueing up. I knew there was a picnic shelter at McKinley Woods and struck out for it. The last few miles were stressful as the rain clouded up my sunglasses and there were puddles on the trail that freaked me out after already taking a tumble. We arrived just as the storm really hit.

The flashes of lightning were intense followed by immediate contusive thunder. The ground shook. My ears rang. At times I jumped up from sitting at a picnic table to clasp my hands in fear. The rain poured down.

A minute or two after we arrived another cyclist slipped in. So he was there for us screaming when the cracks of thunder startled us. He checked his phone and said it was all around us and extensive. So there goes that 80%. He called his wife and said, Bring the truck. He told us he lived just up the hill in a subdivision. As he ran out to catch his ride he called out to us: It’s supposed to start hailing. This will later feel like a parable for climate change.

Well, it didn’t hail, but, and it’s hard to believe, it rained harder. At times it was a white-out, as if we were sitting in a bowl of milk. The rain was that thick. Water poured down a hill and created its own gullies, it ran through the picnic shelter and continued on down to the canal. It flowed faster and the shelter began to fill up. It was at first just messy, then annoying, then we climbed up on the picnic tables. Water was everywhere around us, ankle deep, and swirling with speed.

At this point a phrase went through my mind: If I get out of here alive, I’ll be really glad.

There came a point where it did slack. Out in the parking lot were 3 hatchbacks. The drivers ran back to their cars from wherever they were waiting out the storm. I ran out to them to beg for a ride. One guy seemed willing to take Rian and I but not our bikes. We waded back into the shelter and got back on top of the table.

Here is where it’s important to have friends. I had enough battery left to make one phone call. I asked someone to drive down from Chicago to rescue us. No small feat on Pride Weekend. It took them 90 minutes and truthfully by the time they reached us the rain had stopped, we were still inundated and had to walk the bikes through standing water to reach them in the parking lot. We learned that it had rained 3 inches in 40 minutes.

But here’s the kicker: that guy who left us in rising water, he lived at the top of the hill, not in a subdivision as much as a gated community of mansions. This, my friends, is what climate change looks like. The rich will have an escape hatch. I’m just glad I had friends who came to my aid. We’re all going to need friends when the waters rise. 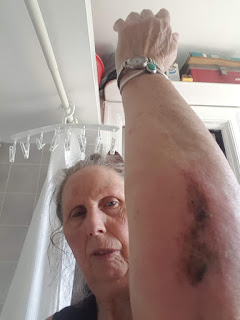 Ooooh, Jane, that elbow wound looks like it really hurts! Hope it doesn't get infected.