They could just be meaningless coincidences, but if so then why do I remember them over and over and shake my head. Flashes of recognition where my path crossed someone else’s. What re the chances!

It’s now closed. They sold vitamins and health food before gluten-free and other foods were more readily available. Before the Whole Foods swallowed up the block. Anyway I went there with some friends. It was an excuse to hang out. I was standing in line with Terry and I heard, almost a murmur, “Jane Feeback.” I looked around. Was it the Muzak? I thought I heard someone saying my maiden name.

It was the cashier. She said I wasn’t sure it was you. She then proceeded to tell me her name. I tried to fake it, but I didn’t remember her. She said, I came to your house collecting for --- cause and you went upstairs and brought down a pickle jarful of coins and cash. I seriously did not remember. The idea I was so extravagant—it was embarrassing. Apparently I just handed over like a week’s worth of tips to her. I’ve never forgotten it, she said.

It was a moment and then we left the store. Since then I’ve not forgotten this encounter.

Meeting Rick and Karen on the Bike Path

I was cycling back from Milwaukee. In early spring. Brilliant sunshine but chilly. Somewhere outside of Zion in the middle of nowhere. I know random. In the distance I spied 2 other cyclists. I caught up with them only to discover it was Rick and Karen. Hi guys! They were on an anniversary outing, coming back from a B & B in Zion. I rode with them for maybe a mile but thinking they might be wanting some alone time I sped up and left them.

This one is much more recent. It was nighttime and I was riding to the train. Friday, and the station in Wilmette was deserted. I wheeled my bike on to the train. I was the only customer. Then, before pulling out another cyclist hurried on. He pulled back his hood and I was surprised. Teel! We looked at each other and laughed. Neither of us expected to see another rider at that hour, at this time of year. We chatted the whole way back into the city.

Out of the Mist

This last instance doesn’t necessarily involve me personally, but tangentially. My friend Johanna was just here from Germany visiting. We’ve known each other for 20 years. In fact we had a reunion camping trip up in Door County. When she was here the first time she and I and Monica went to Newport State Beach and camped by the shore of Lake Michigan.

Back home in Germany sometime in the late 1990s she met a guy walking in the forest. It was foggy and not very crowded. In this nature park were giant relics left behind by the Romans, supposedly marauding barbarians scared them off and they abandoned big stone things. She noticed his T-shirt, a band she recognized. He said he was from Chicago and she asked him if he knew Jane Hertenstein. Well, in fact Terry did. 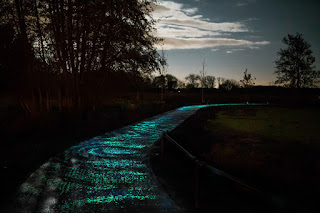