I missed the fireworks this year in Chicago--basically gunshots which I can hear anytime!

Where becomes , where the shock and awe of rocks , where everyone in the city not only owns a gun but an arsenal of fireworks. Where the sky lights up and the buildings reverberate the chest-thumping KABOOM, where all night long m80s punctuate the city soundscape, and the pop-pop-pop of Blackcats compete with infrequent gunfire. Where Roman candles sizzle and burst setting off car alarms and where children chase falling sparks as if they’re fireflies. Where screamin’ meemies spin and whistle while overhead pinwheels of color blossom and dissolve into a shower of stars, once alive but now extinguished, leaving behind contrails of vapor. We shake the numbness from our ears. Where even the moon smolders behind a haze of red, green, and yellow and sulfur clouds hang suspended, making the apparitions below seem as if they are moving in slow motion. Where each concussive blast answers with yet another explosion, louder than the last. Where all too soon it’s over.

Except for the pretty girl in short shorts dancing, her face aglow. 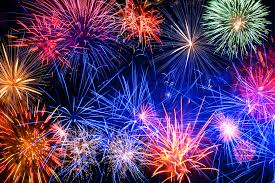 Email ThisBlogThis!Share to TwitterShare to FacebookShare to Pinterest
Labels: 4th of July Anarchy, After Hours, flashback